Have you ever received an invitation that made your heart say YES before your mind could even catch up? Ever had such a strong gut feeling that you needed to be at this exact place, doing this exact thing?

That’s how I felt when I was asked to give the keynote speech at this year’s Heart of L’Arche Fundraising Breakfast in Arlington, Virginia on April 25, 2018.

Titled, “Risk Reaching Out,” this talk was part of a program that helped raise over $135,000 to support the L’Arche Greater Washington DC community.

L’Arche is a worldwide nonprofit that creates homes where people with and without intellectual and developmental disabilities share life together.

(I served in various roles there for five years, and it’s where my husband Jonathan and I met. The people there are family, and they are with me wherever I go.)

Click here to watch the keynote talk on YouTube, or press play below. I also include the approximate text of the talk, so you can read along.

“Make a list of things you need.
Leave it empty,
Except for number one …
Write: Love.
Gamble everything.”

Those are the lyrics to a Ben Lee song called “Gamble Everything for Love”. When I lived in the L’Arche Ontario Road home, my housemates and I would play it loud and dance around the kitchen.

One of my former housemates, Walton, embodied the truth of that song for me. Walton passed away recently, but he was – and is – my greatest teacher in the art of reaching out. 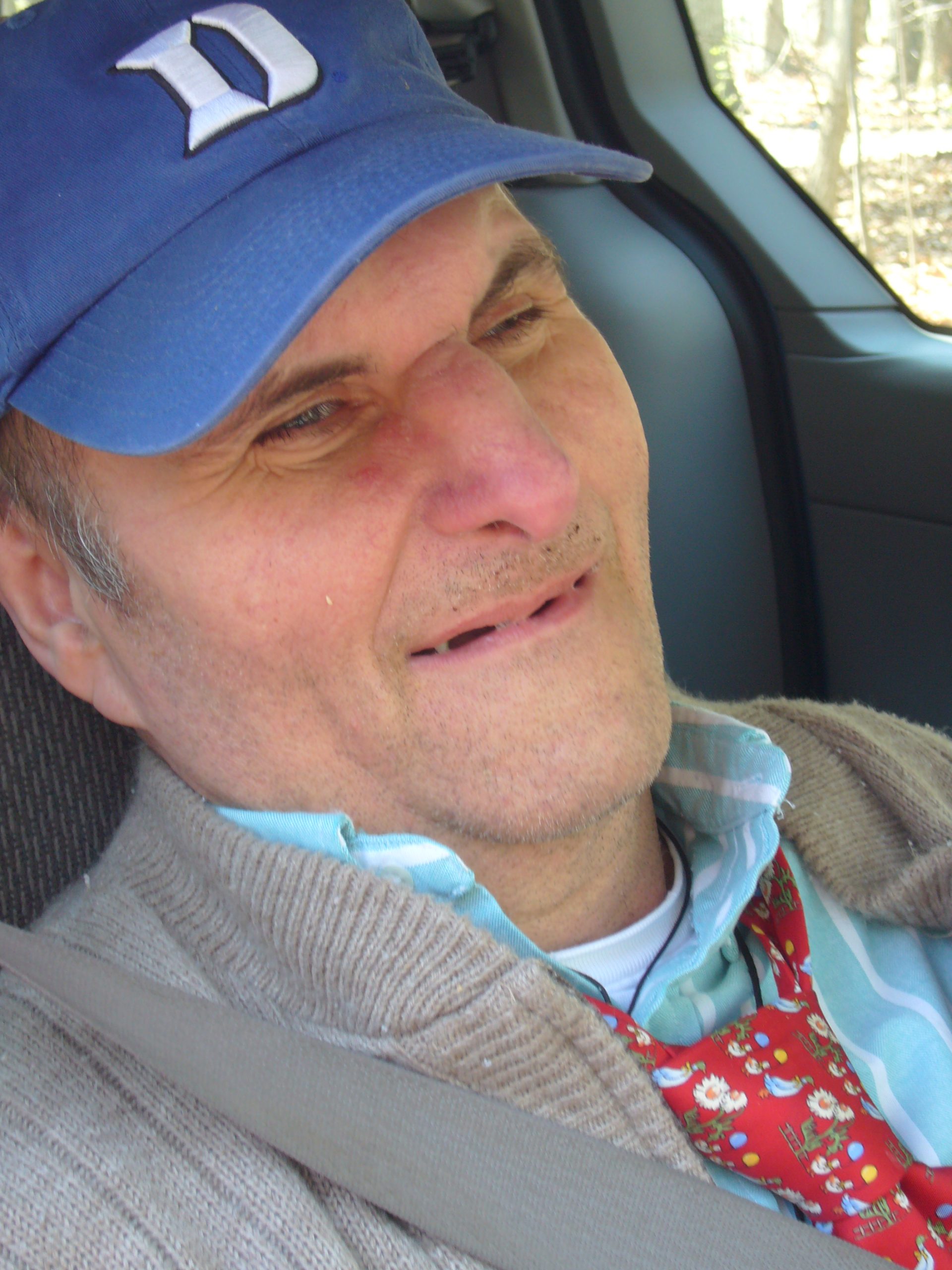 He very well might not have been, though. After all, the Walton I knew needed a lot of hands-on assistance for tasks most of us take for granted, such as eating and showering.

Walton was dealt a difficult hand; he didn’t get many of what our culture considers “winning” cards. He was no stranger to pain, illness, or the ICU. He had every reason to be bitter and withdrawn, but he wasn’t.

Here’s what I wrote about Walton back when we were housemates: “Walton welcomes everyone who comes to our house. No matter who visits us, Walton wants to shake their hands. He greets people without hesitation, without inhibition.”

He didn’t just reach out to people who came to our house, though. Once when I pushed Walton’s wheelchair through our neighborhood, I saw how intentional he was with his greetings.

Though we passed hoards of people on our weekend walk, Walton didn’t greet anybody. But just before we returned home, Walton suddenly waved and smiled with great enthusiasm.

When I followed his gaze up Columbia Road, I saw three elderly gentlemen slumped against the wall of Payless Shoes. When they saw Walton, their faces lit up and they waved back.

And it struck me that Walton had saved his best greeting for the people on the edges, for those the rest of us tend to miss or ignore. 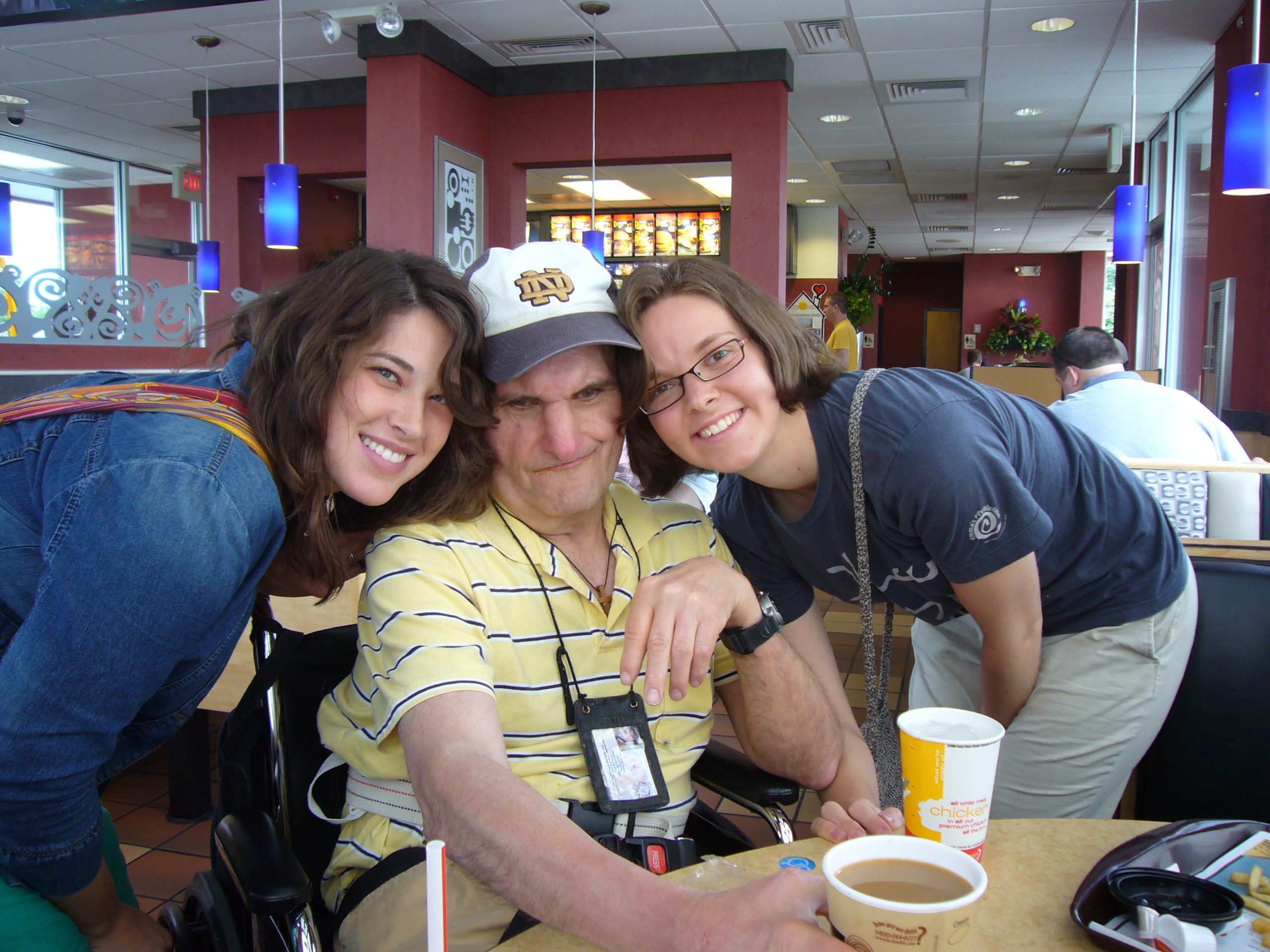 But then one day at Starbucks, I saw it happen.

Walton and his brother Johnny and I were having coffee at a corner table. Johnny was talking and talking while Walton was fairly quiet, just offering his hand to those who passed close to our table. “Shake-a-hand?” he’d say. And everyone smiled and gave him their hands … until one man didn’t.

Walton extended his hand, beaming up at the businessman in his tailored suit. The man stared back, but his gaze seemed cold. I saw him taking in Walton’s wheelchair and his obvious differences. Without a word, the man turned his back and turned away. Walton’s hand stayed outstretched, but his face fell.

Now, I am as conflict-avoidant as they come, but I wanted to punch that guy in the face. (But I didn’t.) Instead I turned back to Walton, and after a beat he calmly went back to sipping coffee.

And I don’t know if Walton shook any more hands that day, but I can tell you that he kept reaching out in all the days that followed.

Looking back, I’m actually grateful to that man, insensitive though he may have been. I’m grateful because taught me something valuable.

He taught me that in rejecting Walton’s hand, he was actually rejecting himself. He was turning away from the part of himself that he feared was different, and vulnerable.

That man refused to give Walton his hand because he was afraid. And I can relate to that.

When I first started as an assistant at L’Arche Ontario Road, I was eager to learn and to serve, but I also felt scared and overwhelmed by my new housemates … maybe a little like that man in the suit at Starbucks might have felt. It’s hard to remember that feeling now, but it’s true.

Back then, I saw high medical needs and I heard speech impediments and it all felt foreign to me. Though I grew up with a younger brother on the autism spectrum, I worried that I was out of my depth at L’Arche, that I wouldn’t belong.

Very quickly, though, my housemates folded me into their family. We shared meals, we traveled on vacation, and we spent so much time together.

I learned how to administer their medication and do their physical-therapy exercises and clean very carefully between their toes. I grew to trust them with my true self, as they trusted me with their true selves.

Like so many of my fellow assistants, I used to go and sit in Walton’s room whenever I felt really down. I’d bask in his presence like someone with seasonal affective disorder in front of a light box; sitting with him was like a sun-lamp for the soul. 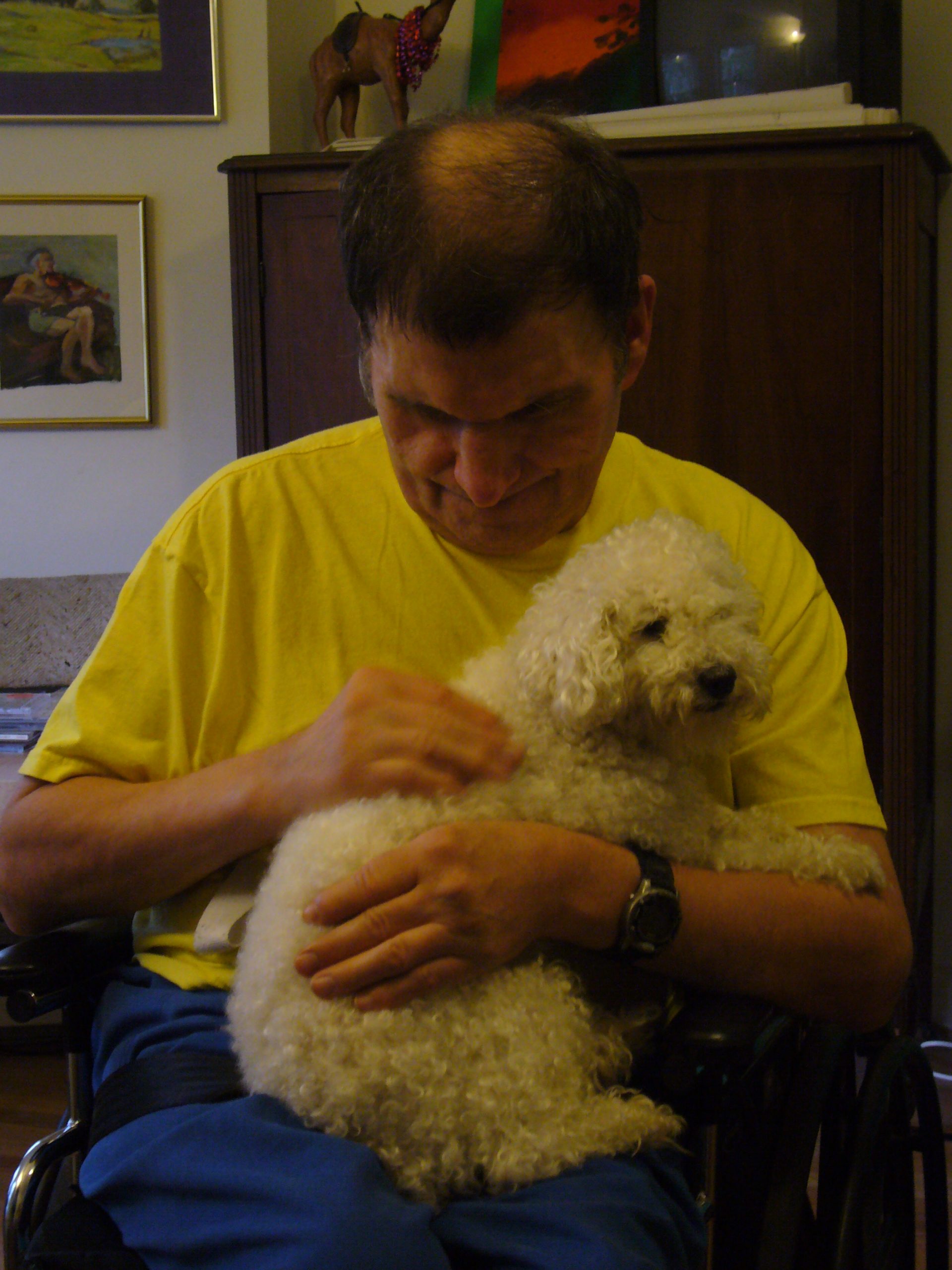 Even so, I have empathy for that man at Starbucks, because I can remember the disconcerting “otherness” I felt when I first came to L’Arche.

In my first few minutes at Ontario Road, Walton’s brother Johnny came up to me, leaned in close, and spoke loudly in Spanish. He raised his arms and gestured and I didn’t have the faintest idea what he was saying.

But then another assistant translated, and I realized that Johnny was giving me a blessing.

I think that’s a metaphor for the truth about L’Arche, and about life. Whatever you fear, whatever you don’t understand … in translation, it all turns out to be a blessing.

It wasn’t until this year that I learned that the Ben Lee song, “Gamble Everything for Love” – the one we used to dance to in the Ontario Road kitchen – was inspired by a much older verse.

The original poem is by Rumi, a 13th century Persian Sunni Muslim poet and mystic. Rumi’s lines go like this:

“Gamble everything for love, if you’re a true human being. If not, leave this gathering. Halfheartedness doesn’t reach into majesty.”

That last line gives me chills, because it reminds me of what my friends at L’Arche have taught me: while halfheartedness doesn’t reach into majesty, wholeheartedness does.

Though I now live hundreds of miles away in Alabama, the moment that Walton passed away, I felt it.

That might sound impossible, and that’s okay. All I can tell you is that it was true for me. At the time of his death, I was going about my usual routine, stepping out of a bathtub, and suddenly I felt this deep sense of peace and profound freedom.

I knew that it was Walton. I knew that he was home. I knew that wholeheartedness had reached into majesty. I was stunned by the strength of it … but on a deeper level, I was not surprised.

If L’Arche has taught me anything, it’s that when we risk reaching out, something eternal reaches back to us.

And when we gamble everything for love, we always win in the end.

Do you risk reaching out? Join the conversation in the comments below!