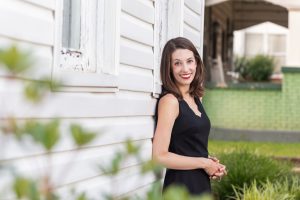 I had my first anxiety attack in the first grade. When my teacher returned my paper with See Me written in red ink instead of the usual Excellent, I felt such paralyzing fear that I almost couldn’t breathe.

It wasn’t until years later that I wondered: Why, at six years old, was I so terrified of failure? How did I acquire this near-primal need to be perfect?

Of course, the answer is complicated. Some of it goes back to my younger brother Willie’s autism diagnosis and how I took on the role of the Golden Child in our family.

Some of it goes back to the cultic church of childhood where I learned to earn God’s favor.

And perhaps some of it was with me from the get-go as the lesson I needed to learn in this life.

(For those of you who love to geek out on personality types as much as I do, I identify as a Myers-Briggs INFJ and an Enneagram 1 wing 9, a Perfectionist with Peacemaker wing.)

Doing My Best to Be Good

Growing up, I won awards and accolades and fought against failure with everything I had.

When Willie started having violent meltdowns, I held it together in public, then hyperventilated and cut myself in private.

When I got into a serious car accident on the way to high school, I insisted on going right to class afterward. (Trauma? What trauma? I’m fine!)

I showed up as a problem-solver, yet in my secret heart, I feared that I WAS the problem. What’s wrong with you? was the shaming mantra in my mind, appearing at the slightest sign of weakness.

I believed that trying harder would save me, when in truth it kept me stuck. I tried to reason my way out of deep fear, and it simply didn’t work.

The thing that did help – the thing that saved me, really – was learning to bring love to the parts of myself that were hurting and terrified.

Fortunately, I had true friends to show me how to do that.

Then there was the L’Arche community where I lived alongside adults with intellectual and developmental disabilities. There, I learned how to love in vulnerability, not just in strength. I wrote my first book, met my beloved husband Jonathan, and risked reaching out.

And then there was the blizzard that hit our lives, the howling snow where I was lost and the Love that led me home.

What I Do Now

In that spirit, I’m the author of You Don’t Owe Anyone: Free Yourself from the Weight of Expectations (Broadleaf Books, 2021).

Receive the first chapter of You Don’t Owe Anyone today!

Learn how to free yourself from the weight of expectations and move forward without apology. (You’ll also receive new posts via email and other goodies.) 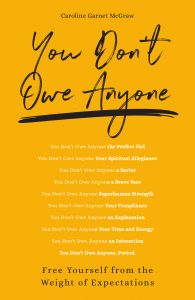