Friends, a funny thing happened when I started writing about what it was like to speak at TEDxBirmingham: I kept using plural pronouns. I kept writing, “We traveled, we spoke.”

Don’t worry, there’s a simpler explanation than schizophrenia. I wrote in the plural because I felt your excitement and encouragement as a tangible presence at TEDxBirmingham, and I cannot thank you enough for that.

Plus, you helped me choose my topic; I based the talk around this post. Your thoughtful responses galvanized me to write and speak about our shared struggle with perfectionism. I’ll post the text of the talk within the next few weeks, along with the forthcoming video. Until then, here’s what I learned. 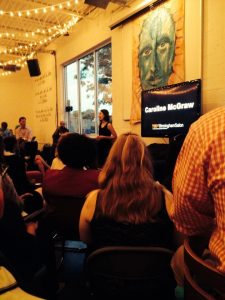 First, say yes to the opportunities that feel right and resonant … even if they demand a great deal of effort. In order to give one four-minute talk at TEDxBirminghamSalon, I made two four-hour round trip drives (one for a mandatory training, and one for the actual event).

Plus, I practiced my talk endlessly. I went over it as I lifted weights and ran, as I brushed my teeth and lay in bed at night. When I woke up the morning after the event, I automatically started rehearsing in my head before I realized: I already gave the talk!

Participating in the Salon was an investment of time and money and energy, but I’d do it again in a heartbeat. When I saw that applications were open, I felt a very clear YES.

I’m learning to trust those capital-letter YES moments, to honor the way in which I ‘just know’ about certain things. How did I know that I wanted to move to L’Arche DC, marry Jonathan, or adopt Bootsie the cat? I had some data to go on, but mostly, I just trusted that gut-feeling YES.

To be sure, I haven’t always had faith to be patient and wait for that true YES, or to say no in situations when it wasn’t there. But when I have heard it and heeded it? Magic.

On the drive down, I confessed to Jonathan that I used to think only ‘special’ people could give TEDx talks. He sagely pointed out, “They have to have real people up there. They have to choose somebody; why wouldn’t it be you?”

This is one of the greatest gifts you can give another person, the devil’s advocate question, Why not you?

Since I shared the story of how I applied for TEDxBirminghamSalon, several people have confided, “I didn’t know that you could apply for TEDx talks. I thought you had to be asked.”

And if that’s not a metaphor for life, I don’t know what is. So many of us are waiting to be asked, assuming that we’re not invited: to a friendship, a job, a TEDx slot. Most of the time, we don’t question – much less test – our assumptions.

I include myself in this, of course. I wouldn’t have pursued speaking at TEDx had a friend’s Facebook post not shattered my preconceptions about what was and wasn’t possible.

When you do, doubts will assail you. Every five seconds, a fearful loop will run through your mind: This is crazy. Am I crazy? This will never work, I don’t know what I’m doing. This is crazy …

This thought-loop is normal, albeit annoying. Just put the fearful thoughts aside, and keep breathing as you take your next step.

If you can’t imagine that you’ll have the faith required to actually do whatever it is you’re dreaming about, that’s OK. You don’t need to know how you’re going to keep the faith ten steps down the line. Here and now, all you need is the faith to take one step.

Slaying the Dragons of Self-Doubt 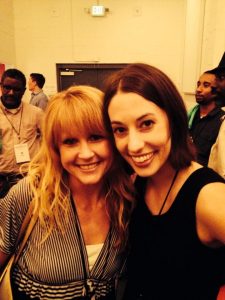 Celebrating after the talk! Photo courtesy of Kristy McKinney.

Even if you take your first few steps alone, you’ll meet teammates along the way. In fact, one of my favorite parts of TEDxBirminghamSalon was the camaraderie between the speakers.

Since our Salon presentations were also auditions for speaking slots at the larger TEDxBirmingham in February 2015, you might imagine a tense, competitive atmosphere … but it wasn’t like that at all.

One by one, each speaker took the stage and went into battle, but we weren’t fighting one another. Instead, each of us slew our own dragons of fear and self-doubt. Is it any wonder we cheered each another on?

But even the positive atmosphere didn’t help when it came down to the final minutes before I took the stage. For me, that’s the worst part of any speaking engagement. Every doubt and fear converges, and I wish I could throw up or run away or maybe die, just to escape the feeling.

As I waited to speak, I tried to remind myself: your job is simply to show up and do your best with love. But in the last five minutes, nothing really helps. The only good thing about that time is that it is finite.

When I took the stage, I looked down at my feet, centering them on the bright, soft red carpet. It was the exact place I’d dreamed about standing.

I took a deep breath and began.

People say that the talk went very well; I hope they’re right. My memory is a scattered series of snapshots: an expression on someone’s face, an unexpected burst of laughter, the jubilation I felt when I said, “Thank you.”

I’ll keep you posted about whether I’m invited to present at TEDxBirmingham. Right now, I’m balancing the (strong!) desire to speak again with a focus on peace, dropping the attachment to a particular outcome.

No matter what happens next, I’ve already seen a dream realized …

And I’m so thankful to celebrate with you.

What are some of your hard-earned life lessons? Join the conversation in the comments below!