It all began when I started learning to drive our stick-shift truck. During ‘driving practice’, I’d have (metaphorical) blinders on. It was me against the truck, and the battle demanded every bit of my focus. 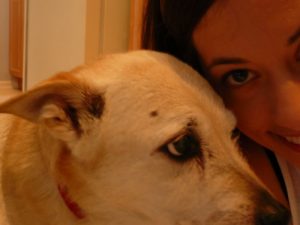 Meet Curley, the sweet puppy I grew up with.

Gradually, I started looking around as I drove. When I did, I noticed an elegant German Shepherd with mournful eyes. She’d bark at me, but I could tell her heart wasn’t in it.

She was chained to a tree. She had food and water, but only an unlined barrel for shelter.

I asked around, and found that, as I’d feared, the dog was never unchained. I also learned that several neighbors had approached the owners to advocate for the animal … to no avail.

I didn’t know what to do. I thought of her every time the temperature dipped below freezing.

Days passed. Every time I saw the dog, I felt a tug at my spirit. My conscience said, Do something. Don’t pretend this doesn’t break your heart.

I mentally replied, Like what? It’s not my business …

The tug said: But it is. It is, because you’ve seen it, and you know it isn’t right. Please, do something.

But I didn’t know how to respond. When I passed the dog, I ducked my head, ashamed.

The day before Valentine’s Day, my husband and I invited friends over. The conversation turned to the dog; they’d noticed her too. Collectively, we agreed that her situation was awful. Our friends mentioned a rescue league as a possible resource, and I heard myself say, “Good idea. I’ll look them up first thing tomorrow.”

And suddenly, I knew that I would. Our friends’ distress marked the tipping point. I could push aside my own sadness and fear for the animal, but I couldn’t ignore the same emotions on their faces.

I would give this sad-eyed dog a Valentine, the only one I could think to give. 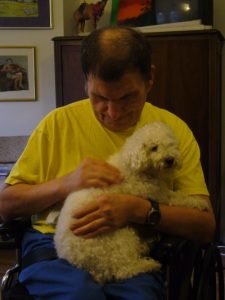 How every dog ought to be loved.

The next day, I did some research. I learned that chaining is banned in several states and communities, but not ours. However, I also discovered that insufficient shelter is grounds for neglect, and that our town’s animal control office was the place to report such conditions.

With my heart beating fast, I dialed and described the dog to the woman on the line. She assured me they’d send someone to assess the situation. I hung up, flooded with relief.

Now at least I’ve done something, I thought.

Days later, I saw the dog again, and I couldn’t believe my eyes. The unlined barrel had vanished, and a dog house had appeared. The dog was still chained, but now, she had shelter.

When I realize this, I feel compassion where I used to feel anger. Though I’m incapable of chaining a dog and depriving it of shelter, I am capable of waiting weeks before doing the right, necessary thing. I have something in common with those owners, and so I cannot judge them.

I tell you this as a confession, and also a plea: when your conscience is calling, answer. When you see injustice and cruelty, do something about it. Do it for others, and do it for yourself as well.

Why? In the words of Dr. Martin Luther King Jr, “Our lives begin to end the day we become silent about things that matter.”

And our lives begin anew the day we break that silence.

Have you faced a similar ‘call to action’? Join the conversation in the comments!