It’s not like you thought it would be, is it? To put it mildly, this past year did not go to plan. It was a reckoning, in every sense of the word.

We’ve seen just how tenuous our “normal” is, just how quickly life as we knew it can end. And so perhaps you’re looking ahead to this new year and feeling a strange mixture of terror and anticipation.

Will things get worse before they get better? Will COVID be a memory by this time next year? Where are we in the scope of this struggle?

Of course, I don’t have the answers. For now, we are still in the middle. There’s hope on the horizon, it’s true, but we can’t gauge the distance yet to travel.

The middle is the keep-on-keeping-on part. It’s the trudge of one foot in front of the other, the seemingly endless march. It’s tough to do, in writing and living.

It’s the hardest part of the story.

Do you know the pain of not giving up?

Six years ago, back in 2015, I started writing a book. As I began the process, I took this picture at our local library.

It’s a series of scrap paper piles; I heeded Anne Lamott’s guidance in Bird by Bird and made a piece of paper to signify each story I wanted to include in the draft.

I’d write the stories to the best of my ability, and then POOF! I’d have a book. Simple, easy, straightforward.

Now, I look back at that and feel compassion and gratitude for Past Caroline, plus a lot of rueful amusement.

(Can you relate? Do you look back at your pre-pandemic self and all the plans she made, with no clue what was coming?)

That said, I’m grateful to my past self for showing up, for putting stories down on paper. That was the starting point, and the work she did there was important.

And also – she had NO IDEA how far she had left to go.

Her book would change so much from that initial draft as to be unrecognizable.

First it was a hot mess of a memoir, then it was a pretty good memoir. But then I let go of the memoir and wrote an unconventional personal development book called You Don’t Owe Anyone: Free Yourself From the Weight of Expectations. 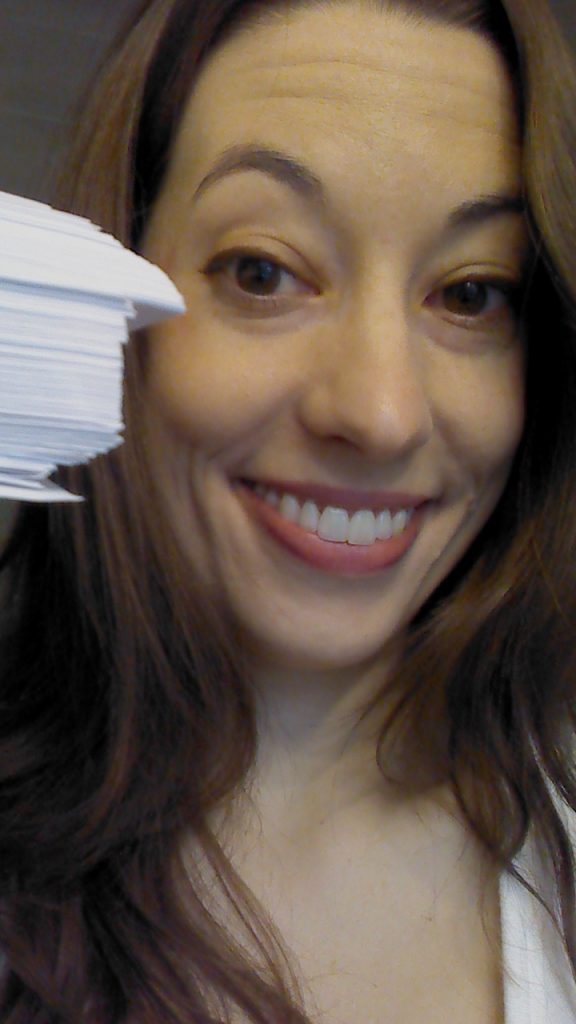 (Holding an older version of the manuscript in 2016.)

You Don’t Owe Anyone is about how I realized that actually, I don’t owe anybody anything.

For years I thought I did. I was world class at being the good girl, the people pleaser, and the super Christian. (I was in a cult, and I was good at it!)

The book is about how I got free from all of that, free from the weight of expectations.

It will be published by Broadleaf Books on April 20, 2021 … but next week I’ll announce a way for you get your hands on it sooner.

Are you in the middle too?

It’s surreal for me to be able to write this to you now, because for MOST of the last six years, my book was in the middle, betwixt and between. For ages its publication wasn’t assured, its success not set in stone.

Is it even the same book I started writing six years ago? Well, yes and no.

Perhaps you can relate to this. Perhaps you’ve looked in the mirror lately and asked yourself, “Am I even the same person I was last year?”

And perhaps you have arrived at the same answer: Yes and no.

You’re not who you were before.
You’re not quite who you’ll become.
You’re in the middle.

If that resonates, what I want to say to you is: You’re not alone here.

If you look in the mirror and barely recognize yourself – me too. If you feel as though no one else knows how hard it is for you just to get through the day – I get it.

The way that we survive the middle is NOT by beating ourselves up for not having “arrived” yet. Rather, we gain strength to endure by sending ourselves love for having come so far.

And finally, thank you to me, for being the only person who knows what it took not to give up.

Isn’t that amazing? Don’t we all forget to acknowledge ourselves for all the not-giving-up we’ve done this year, this lifetime? I know I do.

Right now, please join me in walking to the nearest mirror, looking yourself in the eye, and saying thank you.

Say thank you to the only one who really knows what it took to carry on.

Salute her, in all her bravery and becoming.

Thank her for everything.

PS – Remember to check your email next Tuesday, January 12th, when I’ll tell you how to get an advance copy of You Don’t Owe Anyone!

(Originally sent as an email to our community on January 5, 2021 – the email received such a great response that we turned it into a blog post!)