When someone changes your life, it seems right to say thank you, doesn’t it?

I hope so. But right or wrong, I’m a writer, and you of all people know what that means. It means that I can’t help telling the stories that want to be told.

So here’s what happened when a group of friends and I showed up for your Big Magic event in Nashville.

Not that this will narrow it down, but we were the group that was so excited to see you, clapping and whooping as you took the stage with Ann Patchett. 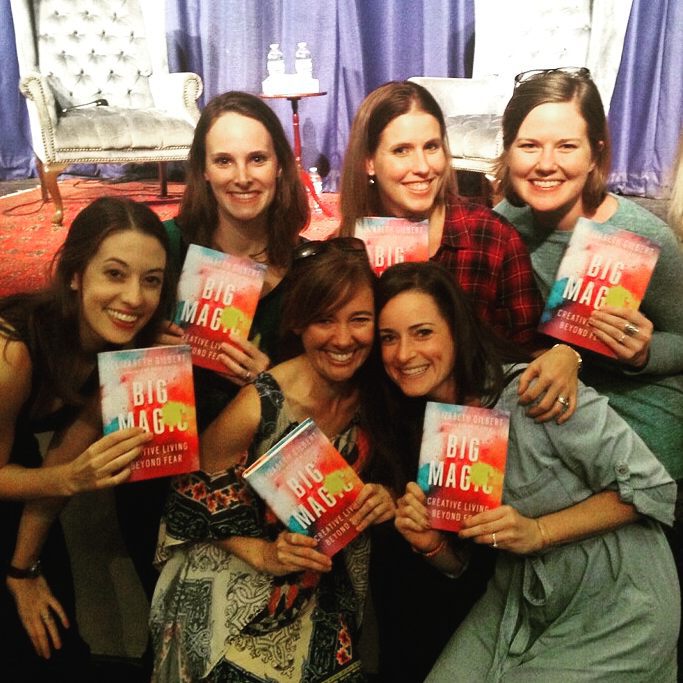 In the hour that followed, we didn’t feel time passing; we could have listened all night. Naturally, we planned to stay and wait in the signing line.

Unlike the rest of our group, though, I’d met you before, at the National Cathedral during the Eat, Pray, Love tour.

That day, a friend and I waited in the signing line, and when it was our turn I made a joke that I’ve long since forgotten … and you laughed. It wasn’t a polite giggle, either. It was a real, honest-to-goodness laugh.

So that’s what I expected in Nashville: a long wait leading up to a quick hug and another shot at making you laugh.

I was looking forward to saying that completely unoriginal, completely heartfelt thing. And given the buzz in the room, I have a feeling I wasn’t the only one. But then you said, gently, that there would be no signing line.

There was a collective sigh of disappointment. But then stillness descended as you described how you’d arrived at that decision.

You said that you’d done signing lines on every tour because you loved meeting readers. You acknowledged that we had traveled great distances, and empathized with our disappointment.

But you also told us that you’d gotten sick on every other tour. And in order for you to emerge from a four-month, six-continent tour alive and well, you’d need to say no to signing lines.

(You did say yes to three days in a warehouse advance-signing 20,000 copies of Big Magic, but who’s counting?)

Essentially, you said, I can’t in all honesty offer a signing line, because that would be a gift that destroyed me in the giving. But I can give you my truth, and maybe that will set you free.

Failure as Part of Boundary Formation

Liz, you said that you needed to do a lot of signing lines to learn that you couldn’t do them with integrity on that tour. You needed to get sick a bunch of times in order to figure out how to stay well.

This idea was a game-changer for me. For years, I’ve berated myself for not always knowing where my personal boundaries ought to be. So every time I stayed up too late or let people keep me on the phone too long, I’d feel like a failure. Shouldn’t I have known better?

But you said that these overload experiences are an essential part of boundary formation. Who knew?

And then, of course, there was the overwhelming fear that I wouldn’t be loved if I set limits.

When I took solo time to recharge during a family visit, when I chose not to respond to certain messages … those choices felt scary, because they registered in my mind as ‘selfish’. And people who are so ‘selfish’ as to guard their time aren’t beloved, right?

Yet there you were, just a few yards away, unapologetically setting a boundary in support of your own well-being. And our love and respect for you was palpable.

The words you spoke were powerful not because they were the ones we wanted to hear, but because they came from a place of integrity.

Martha Beck defines integrity as being the same version of yourself in every situation, and that’s what you personified, Liz. You were kind enough to be real.

As Wayne Muller writes in A Life of Being, Having and Doing Enough:

“There are two kinds of compassion and care. One is honest kindness, and the other, dishonest kindness. How many times have we promised, or pretended to be available, to listen, to care, when, in that moment, we honestly had no such capacity? And do we imagine that dishonest kindness actually brings healing and ease to another– or do we seed an unintended suffering?”

Your example of honest kindness would have been enough. But then you instructed us to Google the lyrics to “Take Me Home, Country Roads” by John Denver and join you in song.

My friends picked up their phones, but not me. I knew the words by heart, since I sang them for a decade’s worth of summer camps. Each year, the camp band played “Country Roads” before we all said our bittersweet goodbyes. It was a song that I felt from the soles of my feet to the lump in my throat.

As the Nashville crowd started singing, I was afraid that I’d be hit by a wave of longing for times past, for old friends. Instead, I was rooted in the present.

From that place of stability, I felt the presence of every person I’d ever loved in the spaces between the notes. There was no missing anyone, because no one was lost.

And it seemed so astonishingly beautiful that you chose to forgo a signing line in favor of a song about the longing that lies within all of our hearts.

So thank you, Liz Gilbert. Thank you for setting a boundary and taking the risk of disappointing us.

Thank you for the magic of imperfect voices in perfect harmony, of honest kindness leading us home.

Do you have a hard time setting limits? Join the conversation in the comments!