Let’s just be blunt: the last week has been hard.

On behalf of us all, I’d like a cosmic refund. I’d like a do-over, our money back, and some free dessert for the table, please.

Here in the McGraw house, multiple projects stalled, and I felt adrift and unsure. Then the feral cats chose our yard as the new kitty hot spot, leading to a flea infestation. Every time I stepped outside I received new bites, and I’m allergic to them. (Thank God for antihistamines.)

Then I received some disappointing personal news. And after that I heard about the Oregon shooting and dropped into a sea of collective grief. What could anyone say in the face of terrible violence?

Liz Gilbert’s reflection helped. Basically, Liz wrote that when we’re faced with sorrow beyond comprehension, we can at least sit with hurting people and know nothing together.

Also, this great line of Liz’s gave me my only laugh of the day:

“To say to someone who is being asked to endure the worst sorrow of their lives: ‘God never gives us more than we can handle!’ is so outrageously hurtful, I don’t know how anyone ever got to the end of that sentence without being punched in the face.”

The essay reminded me that sometimes, the next right thing to do is just be with the people you love, even with nothing figured out and a heavy sadness weighing you down.

That’s how I felt when Jonathan and I set out for a place called Tom’s Wall last weekend. You can read about it in the New York Times if you like, but here’s how Jonathan explained it:

“Tom Hendrix is a retiree who’s been building a huge stone wall single-handedly as a memorial to his great-great-grandmother Te-lah-nay, a Native American displaced during the Trail of Tears. She was forced to leave here and go to Oklahoma, but when she got there she said, ‘F&*$ this!’ and walked all the way back. Want to see it?”

At first, I was in tourist mode, buzzing around and taking pictures of the cute stone frogs. 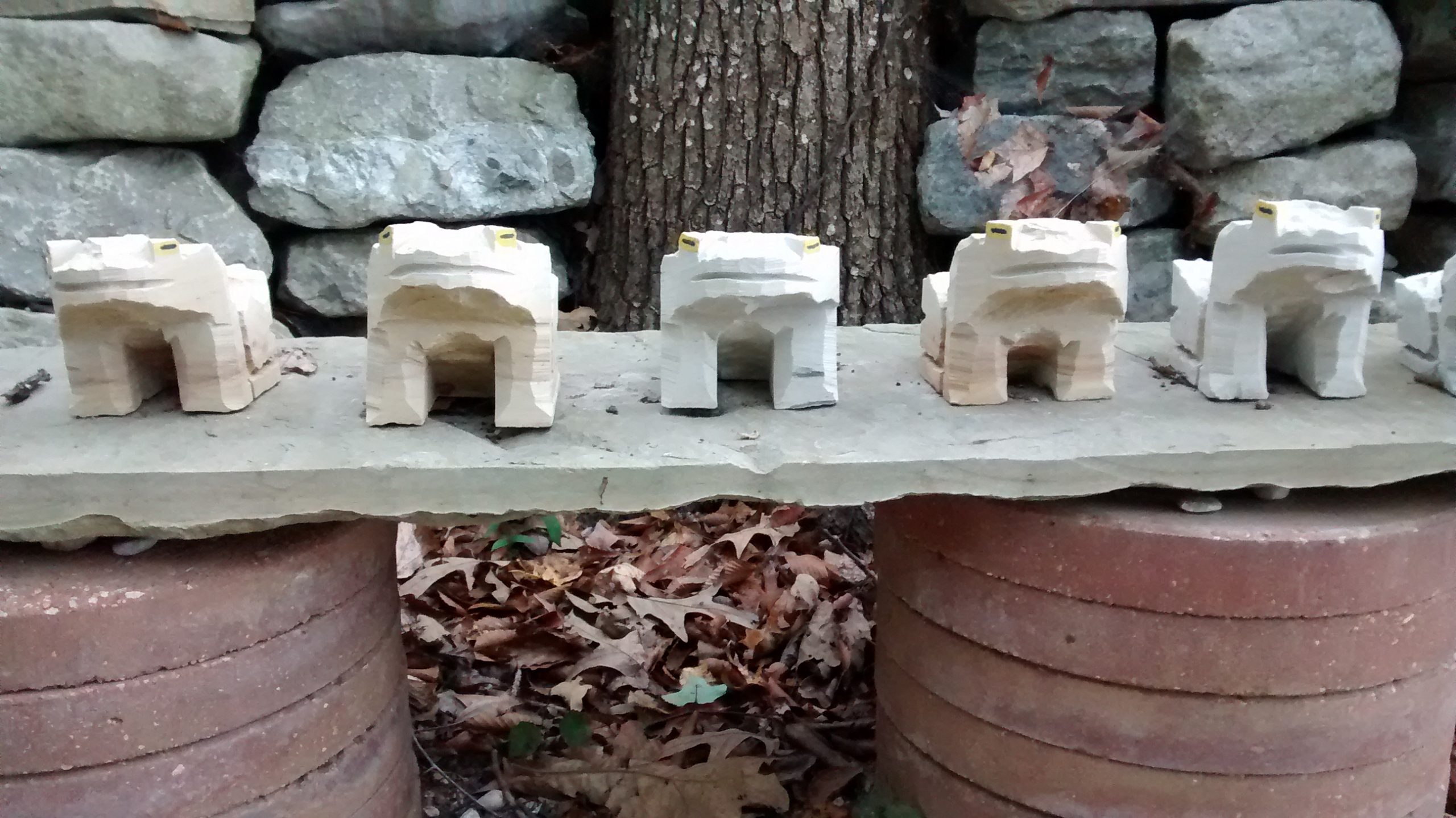 But then the energy shifted. The place felt like an altar, and a hushed reverence stole over us. It felt sacred to me. It felt like the heart of the matter. It felt like fierce, enduring love. 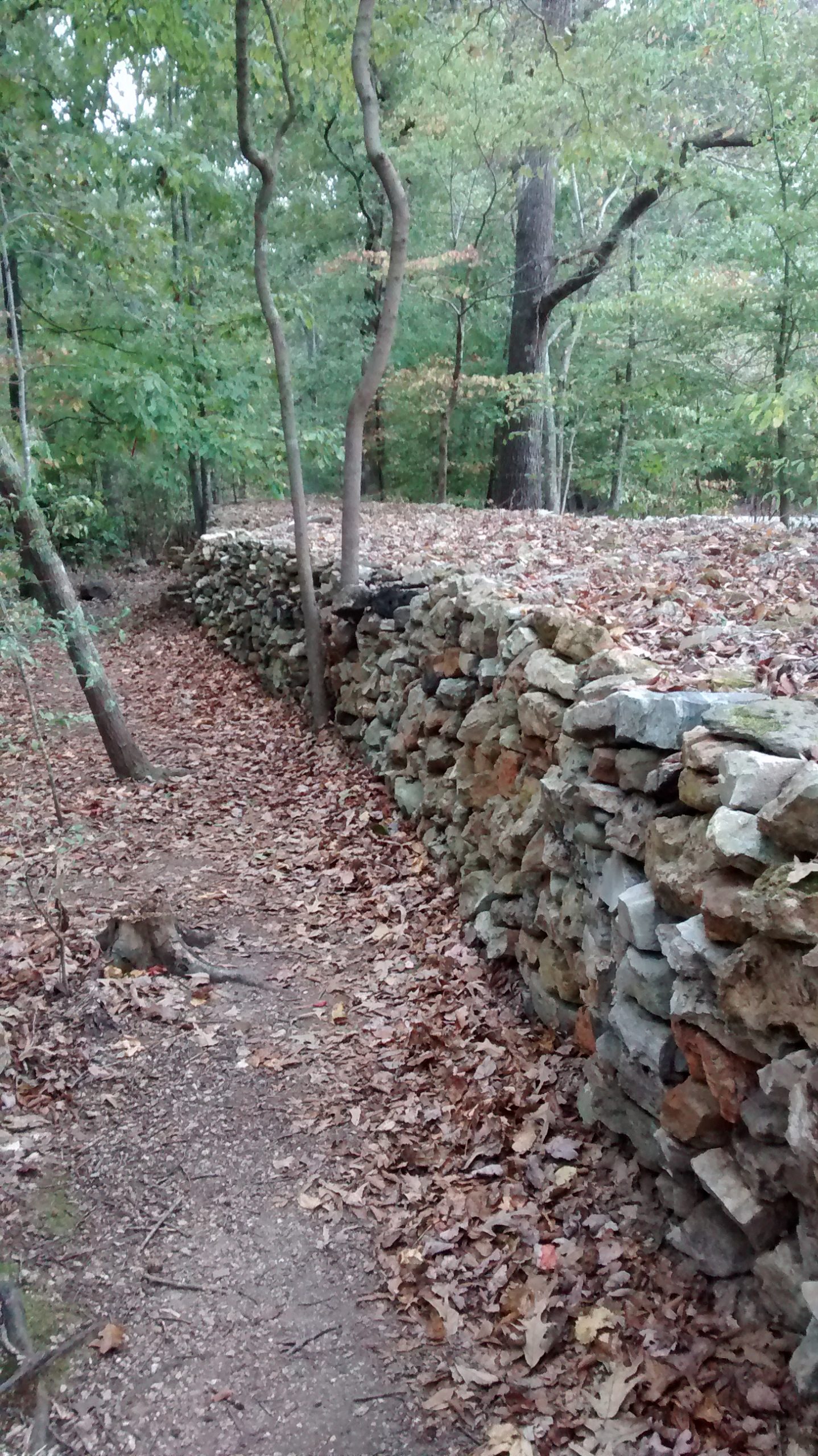 To state the obvious, there are ever so many stones. Since Jonathan has spent the last three years renovating our home, we appreciate how much it takes for one man to labor alone, day in and day out, creating beauty from chaos.

So often, what we do doesn’t feel like much. But if we work steadily for the people we love, we can build something beautiful. 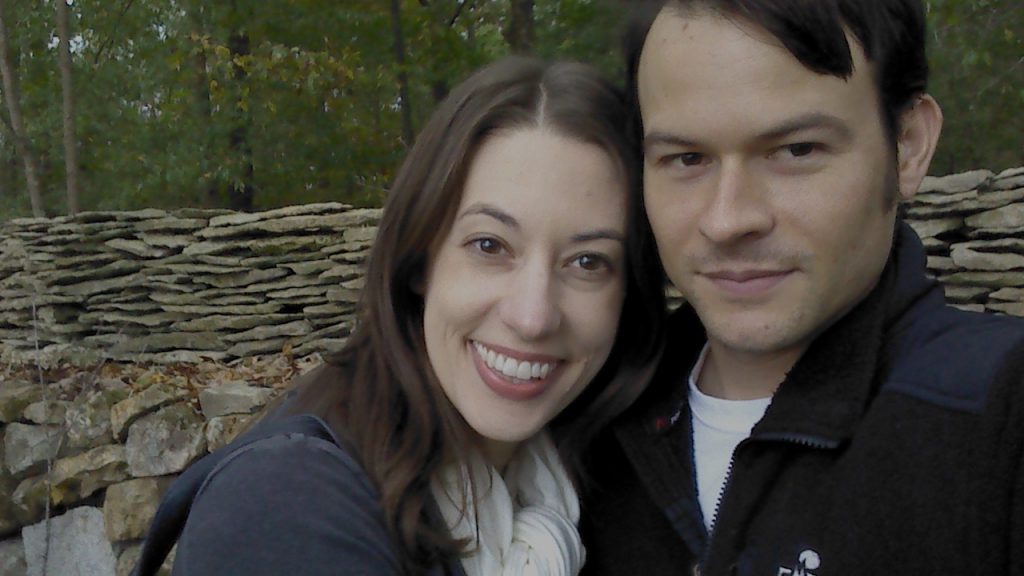 Terrible things happen, and often nothing seems to make any sense at all. But maybe it will help you to know that there is a place in northwestern Alabama where you can see a carefully-placed stone for every step that Te-lah-nay took on her journey homeward.

Maybe it will help you to know that her beautiful defiance is remembered. I know it helped me. 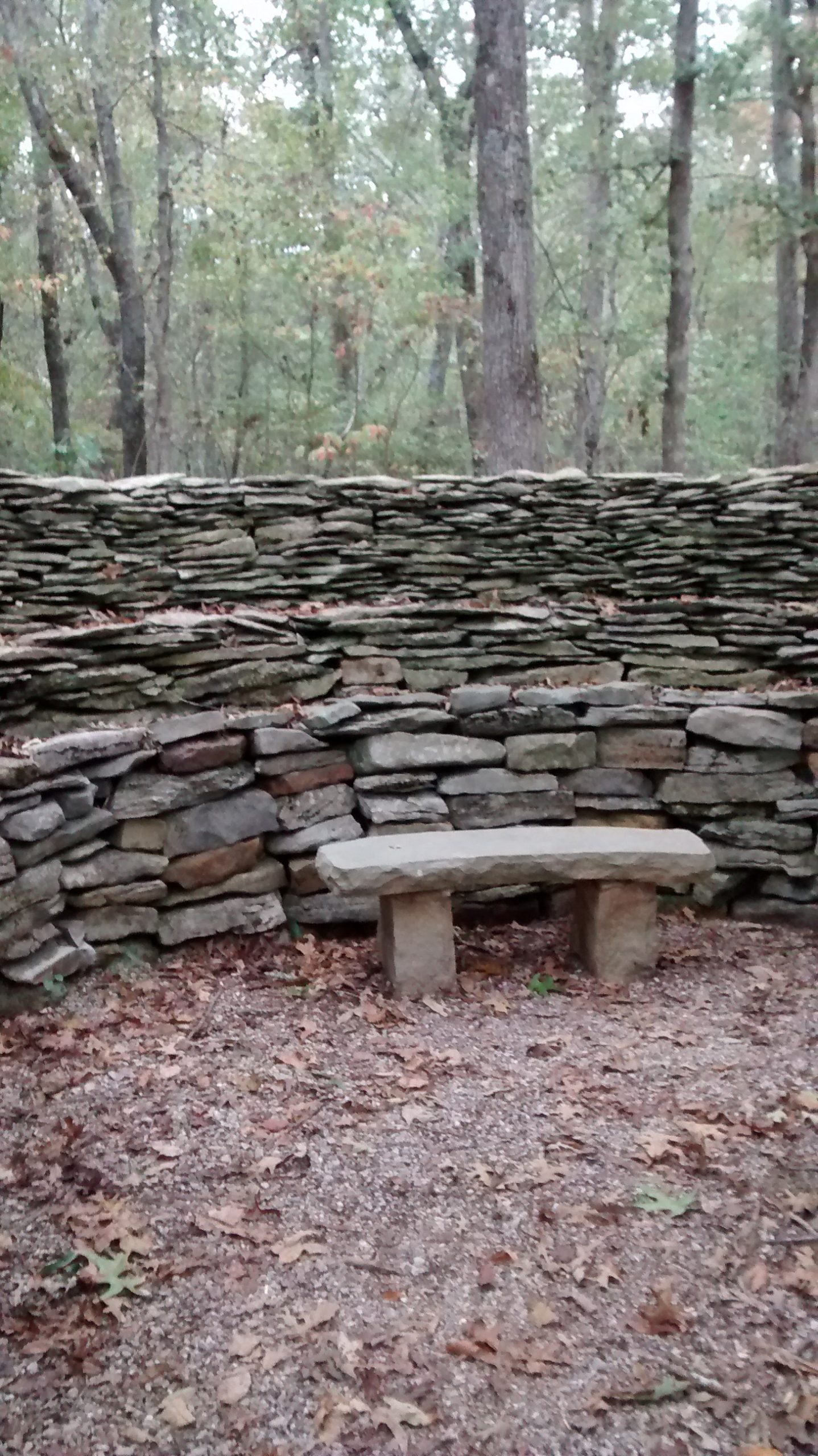 Oddly enough, Tom’s Wall reminded me of my favorite episode of How I Met Your Mother: season 7, episode 17, “No Pressure”. In this episode, it seems like Ted might get back together with his beloved Robin, but once again, it doesn’t happen.

At the end of the episode, things look very bleak for Ted and Robin. Since hope seems lost, Lily asks Marshall to pay up, just as she did when Ted was set to marry Stella in season 4. But once again, Marshall simply smiles and says, “Not yet.”

Tom’s Wall reminds me of that moment. It’s as though in building it, Tom bet against everyone who said that his great-grandmother’s story was over. The wall itself is a giant, gorgeous, defiant, “Not yet.” 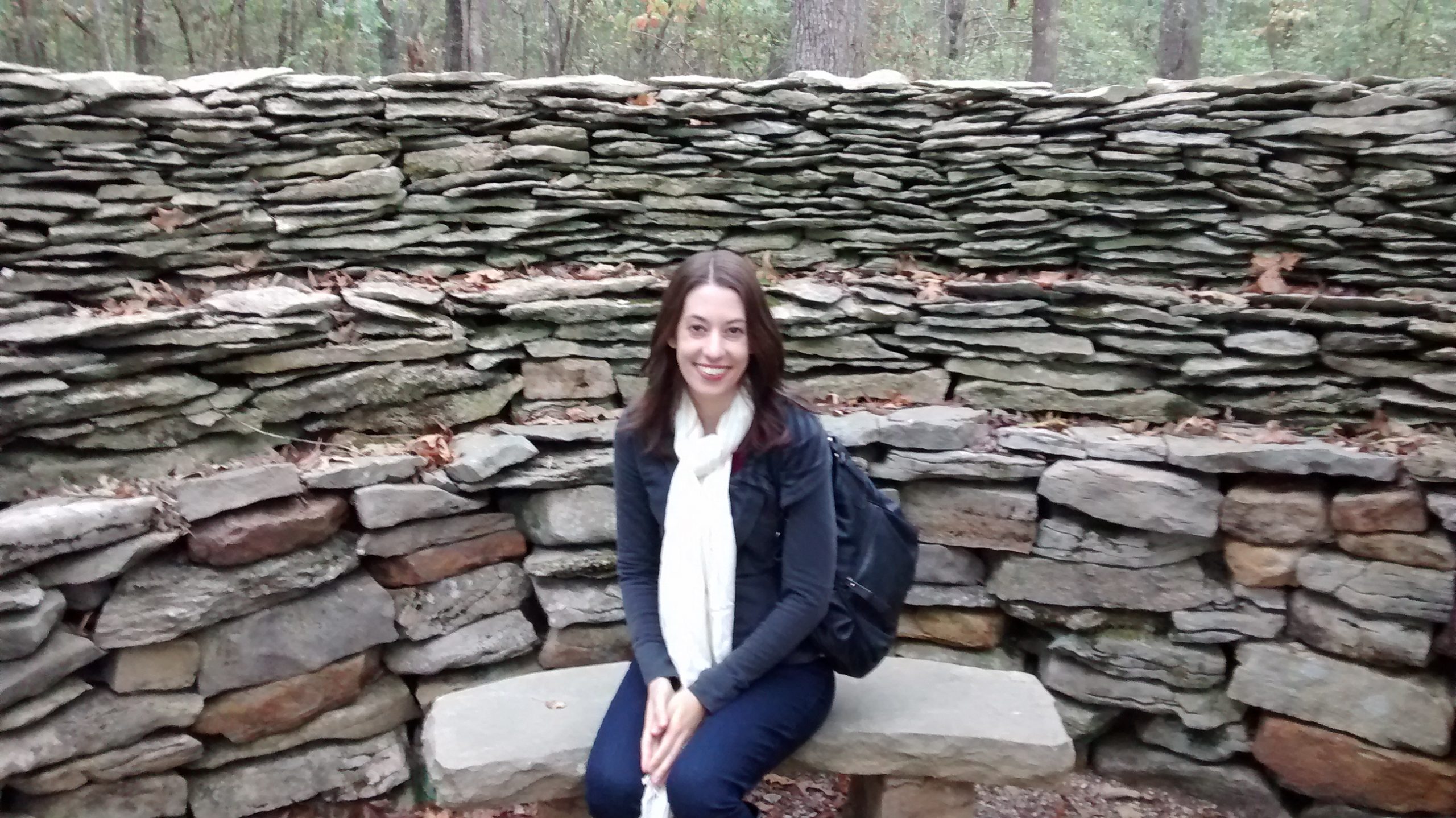 So if your dream seems too far off to be realized: Hang in there, honey. Don’t give up. Dare to believe a little longer.

Sure, sometimes you need to let go of old dreams to make room for new ones. But sometimes you’re on the right road and the going just gets rough. It’s tempting to sit down and surrender to apathy and despair. Instead, you need to hold on tight to what you know in your bones to be true.

You need to be like Te-lah-nay and refuse – absolutely refuse – to stop walking homeward.

And when someone tries to convince you to give up hope – because you know they will – you can smile and say, simply …