Let me guess: it used to be good. That job, that relationship, that volunteer position … whatever it was, it started out fine. But over time, things changed. Or maybe you did. Either way, you’ve got a secret: wanting to leave.

You don’t want to admit it. You’re steadfast, you’re patient, and you do not bail at the first sign of trouble. You stand by your people. These are beautiful qualities.

But sometimes, old loyalties can blind you. Instead of seeing that things need to change, you rationalize, “It’s not really that bad.” However, you’re increasingly uncomfortable, exhausted, or both.

So when is it wise to say, “Enough”? When your deepest truth is that you want to. 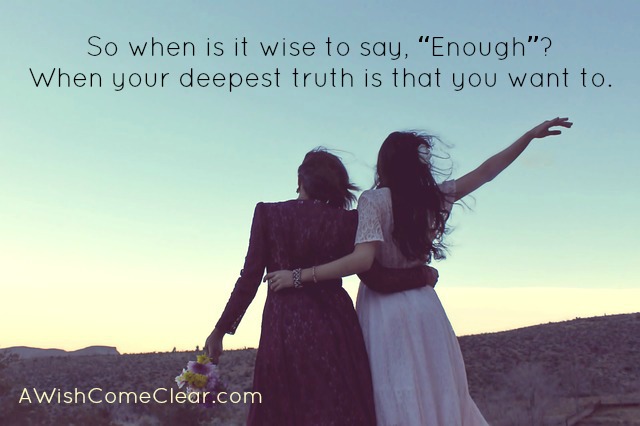 When You’re Wanting to Leave

This is simple, perhaps, but it’s not easy. After all, you still have to deal with the voices in your head.

First, there’s the inner judge telling you that wanting out means that you’re irredeemably bad. If you’re wanting to leave a job, there’s also the fearful voice of scarcity saying, “Don’t quit; you’ll end up a bag lady!”

In times past, I let those voices run the show. As a result, I’d jam myself into jobs that didn’t fit who I am and how I’m made.

For example, I spent two years as a program director at an amazing special needs non-profit called L’Arche. It was a good job, and I was grateful for it. In fact, when I stepped into the new role, I’d already spent two life-changing years as a live-in caregiver with L’Arche.

However, my new role titled heavily toward administrative work, not caregiving. There were moments of warmth and connection, but there were many more tedious hours of data sheets and documentation.

Back then, I thought that if I could just try harder, I’d morph into a person who enjoys attending back-to-back meetings and learning about Medicaid regulations. (Such people exist, and they are wonderful … I’m just not one of them.)

So I filled out mind-numbing Social Security forms, and my friends with disabilities got the benefits they needed. In humble ways, I made a difference.

Still, I couldn’t shake the sense that life was draining out of me with every long commute. Fatigue and frequent illnesses were constant companions. I was always tired, but I’d squeeze in time to write and work on my blog because that was the work that filled me up.

In my secret heart, I wanted to take a chance on writing for a living. Whenever I thought about it, though, a shame spiral ensued: But don’t you love these people? Aren’t you grateful for this job?!

It’s Okay to Be Done

In the midst of this inner conflict, I visited my friend Brooke. We drove to a winery and sat outside, soaking up the end-of-summer sunlight and the last of our time together.

That day, I told her the truth. I said that the thought of another year as program director made my stomach drop and my shoulders tense. I said that I wanted to be a writer. Yet I wondered if I was just being too picky, or too weak. What if I just tried harder … ?

Those words freed me as a key turning in a lock frees a prisoner. Once I heard them, the familiar bars of false guilt and fear couldn’t hold me.

As we clinked glasses and toasted, “To being done,” I felt my life expanding, moving out toward the horizon. I was ready to wave goodbye to what was and hello to what would be. 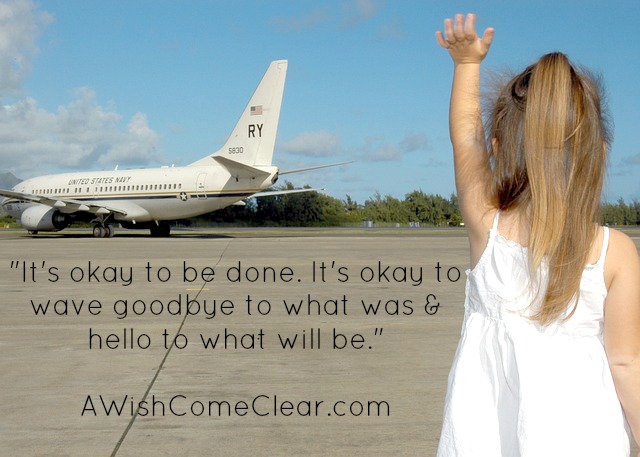 For months before that visit, I’d been asking myself, “How can I want to leave L’Arche when I love my friends so much?” I couldn’t come up with a good answer.

But as Brooke and I raised our glasses, it occurred to me that this was not a useful question. At the end of the day, I did want to leave, and I did love my friends. It was a both/and situation, and it didn’t fit into an either/or slot.

I’d been asking myself how I could feel both love and the desire to leave, as though those two states were mutually exclusive. (Spoiler alert: they aren’t.)

In her brilliant essay, “The Truth that Lives There,” Cheryl Strayed writes:

“Leaving because you want to doesn’t mean you pack your bags the moment there’s strife or struggle or uncertainty. It means that if you yearn to be free of a particular relationship and you feel that yearning lodged within you more firmly than any of the other competing and contrary yearnings are lodged, your desire to leave is not only valid, but probably the right thing to do. Even if someone you love is hurt by that.”

So many of us stall out on making positive changes because we’re waiting for a time when we won’t have competing and contrary yearnings. In my experience, this is totally unrealistic. There’s an ambivalence inherent in any significant transition.

On the day I clicked glasses with Brooke, doubts still swarmed around me like the bees in the deck’s flowerbeds. But I also felt eager, right down to the soles of my feet.

Why is wanting to leave enough? Because what you want and need matters.

If you’re unhappy, your discontent is not something to ignore or stuff down in shame. Rather, it’s something to face head-on and work to change. And sometimes, changing means leaving.

Not everyone will understand this, and that’s okay. You don’t need a group consensus. You just need to trust your truest truth.

Some people will cheer you on – maybe more than you think! – and some will beg you to stay. But at the end of the day, your choices belong to you. You’re the only one who can live your life.

Dare to make it good.

Wanting to leave in some way? Join the conversation in the comments!

Thanks to all who entered our Hands Free Life giveaway! Donna, Lori, Katharine, and Bridget won this time around.

In other news: with Jonathan’s help, I’ve created a new professional website! Stop over to see it at CarolineMcGraw.com.