To this day, I’m not sure how close that plane was to crashing. Suffice to say, I certainly believed we weren’t going to make it … but an unsung hero helped me to stay calm.

I’m no stranger to flying; in the past 6 weeks alone, I’ve boarded 11 flights for speaking engagements. Ordinary turbulence is no big deal. Yet I’ve never experienced anything like what happened on that flight.

I was 15, flying home from Italy with my parents, brother, and best friends. We’d traveled abroad for a church gathering, and after a week of eating gelato and saying Ciao, bella, we were (somewhat reluctantly) heading back to the States.

Everything was normal until it wasn’t. The plane just … dropped. It felt how I imagined the Tower of Terror would feel if I’d had the nerve to go on it.

My body lifted as much as it could against the seatbelt. My friend’s mom didn’t have her seatbelt on, and she shot up to the ceiling. We plummeted a second, terrifying time. There was no explanation from the cockpit or crew. I was sitting near my closest friends, and we held hands.

I remember thinking that I wanted to know more of my story; if my life ended here, it would leave so many questions unanswered. But I forced myself to face reality, thinking: if we drop a third time, it’s over.

The plane dropped a third time. People squawked and protested at the first drop, but as the plane kept taking dives, the cabin grew quieter and quieter.

This past week, I told my husband that story. Though it (obviously) has a happy ending – just major turbulence, no crash – it’s a memory I’ve long since buried.

But as I uncovered it, the question that kept coming to mind wasn’t What the heck happened that day? Instead, my question was: “How did my Dad stay so … buoyant?”

You see, after the first drop, my dad started joking around. He was sitting next to my brother Willie, and he kept up a witty commentary throughout the entire plummeting sequence.

He was quite funny, given the circumstances; I even remember smiling a time or two. Yet I was also incredulous, thinking: My dad is a smart guy. How is he not the least bit worried?

What can I say? I was 15, gullible as I’ve ever been. And somehow, my 15-year-old lack of understanding stayed buried along with the memory. 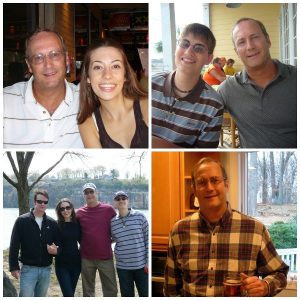 My husband Jonathan wasn’t fooled. When I voiced my question, he raised one eyebrow and answered, “Well, because that’s what dads do.” He looked at me as if it should have been obvious all along.

Jonathan was right, of course. Dad was joking around because of our troubling circumstances. He was keeping things light on purpose, to help Willie and me. In the midst of crisis, he was doing exactly what he’d been doing my whole life: taking care of us.

That’s what [good] dads do. Yes. Of course. When the literal or metaphorical plane is lurching, they turn their attention to helping others. They deserve applause and acclaim for this, but too often, they get taken for granted or misunderstood.

Fortunately, they’re not in it for the praise. So they just carry on, unheralded, living love as an unbreakable habit.

Dad, your 60th birthday is coming up. Mom tells me that you don’t want anything, and that’s actually good, because there’s nothing I can give you that could ever come close to all you’ve given me.

All I can do is tell this story, tell the truth, and hope that it helps others appreciate the unsung heroes in their own lives.

Thank you for believing in me, for supporting my dreams and saying, “Don’t let the turkeys get you down,” just when I needed to hear it most.

Thank you for waking up at 5am to drive me to skating practice, for spending hours in a cold rink just because you knew skating gave me joy.

Thank you for every single pot of coffee you’ve made, for every time you’ve given me directions and not given me grief about getting lost.

In short, thank you for every quiet, humble, ordinary act of extraordinary love. Thank you for being an unsung hero.

Happy birthday, Dad. This is over a decade late, but I just want to say …

Thank you for making me smile on that plane.

Who’s your unsung hero? Join the conversation in the comments!

Thank you for welcoming guest writers to A Wish Come Clear for our Spend It Offering Light series! The final post in the series will run next week.