So I’ve been thinking about this one episode of Oprah’s Life Class.

Now, I’ve only ever seen this one episode, but it’s a really good one, because Martha Beck is on. The topic? “The Truth Will Set You Free.”

My favorite part (at the 25-minute mark) features a lovely woman named Heather. Heather’s terrified to talk with her mom about a taboo topic, namely, the truth about Heather’s father. Heather’s afraid that doing so will jeopardize their relationship.

Martha asks, “So you say you have a relationship with your mother?”

Heather, confused: “Yes, we talk on the phone all the time …”

Martha: “Who do you pretend to be when you’re with your mother? A girl who doesn’t care about her father?”

Martha sums up the situation, saying, “It’s two pretend people, and no pretend people can ever create a real relationship …. If you’re trying to connect false self to false self, it cannot nourish the soul.”

At that point, I imagine millions of people nodding, like, Yeah, she’s got that right. Because we’ve all been there, haven’t we? We’ve all played pretend.

We’ve all hidden the truth about ourselves in order to ‘preserve’ a relationship. But that’s the thing: it doesn’t work. And in the process of trying to ‘make’ it work, we get desperate. It’s like going without food for too long. Without real connection, real nourishment, we lose our strength. But it doesn’t have to be like that.

We don’t have to waste away.

If there’s anything I’ve learned in the 30-day Courage Challenge, it’s that when you stop pretending and start getting real in one area of your life, it has ripple effects. The challenge has made waves; it’s changing the coastline of my life.

Yesterday, for example, when a friend invited me to attend a belly-dancing class, I didn’t say, “Umm … ahh … I’ll … think about it,” which is code for, Never in a million years.

Instead, I paused, thinking: How do I truly feel about the invitation? Hmm … scared, but also intrigued. I like dancing. Plus, it would make a great Courage Challenge.

What popped out of my mouth was, “Wow, how fascinating … I would be so scared to do that!” And the conversation continued smoothly. I went with the truth instead of the polite lie, and the world didn’t end. 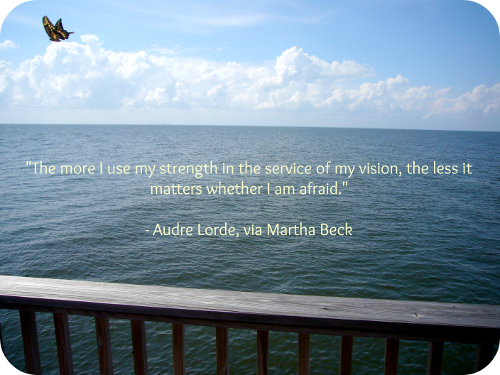 Martha’s advice to Heather is simple, and spot-on: Tell your mother the truth, kindly. Include the fear. Admit that you have been pretending. Start from a new place, a place of truth.

But as Martha says so well later in the Life Class: if you’re always pretending to be someone you’re not, your worst fear has come true. You’re scared of being alone, but sweetie, you already are.

Pretending to be someone you’re not hasn’t brought you closer to the people you love. It hasn’t nourished your soul. So perhaps you’re like me: hungry enough to try another way.

They want to see you strong and free.

Receive posts via email, along with both Your Creed of Care: How to Dig for Treasure in People (Without Getting Buried Alive) AND Love’s Subversive Stance: Ground Yourself & Grow in Relationship. [Click to Tweet.]