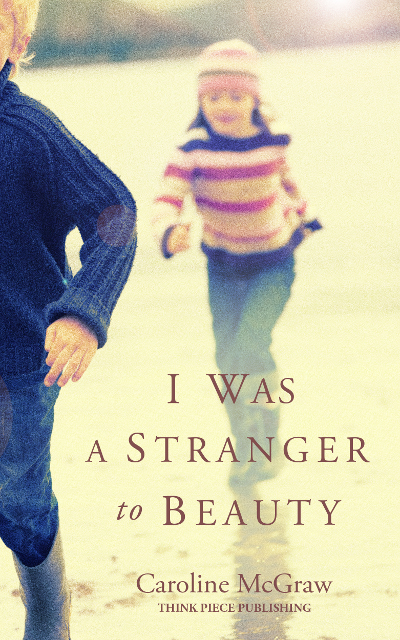 First, I’m happy to share that I Was a Stranger to Beauty (my new Kindle Single) launches with ThinkPiece Publishing next Monday, January 14th! L’Arche DC* will receive 5% of the proceeds from the first month’s sales. Next week’s post will feature an exclusive excerpt, but for this week, a story …

With each New Year, I choose a word as my theme. This New Year, it’s joyful. I want to embrace the fullness of life, with joy. (In fact, ‘Caroline’ comes from the French word ‘carol’, translated, “song of joy.”)

This New Year’s Eve, I recounted joyful memories with my husband, Jonathan. For example, I told him about the first time I saw his face: on a L’Arche brochure.

In the photograph (included below), Jonathan is playing guitar and singing with Gene, the patriarch of L’Arche DC. The first time I saw this picture, I thought, Gene avoids the spotlight. If this guy convinced him to perform, then they must have been close. And what did they sing?

I studied the image intently. If you’ve ever had the sense of knowing something was important without having any idea why, then you know how I was feeling in that moment.

This photograph felt significant to me. So I asked about it, and my friend Melissa filled me in: The mystery man’s name was Jonathan, and had been an assistant at L’Arche few years back.

I felt strangely regretful that this guy and I had missed each other. “Guess they don’t make ’em like that anymore,” I joked, covering the forlorn feeling. Melissa laughed, and I handed the brochure back. 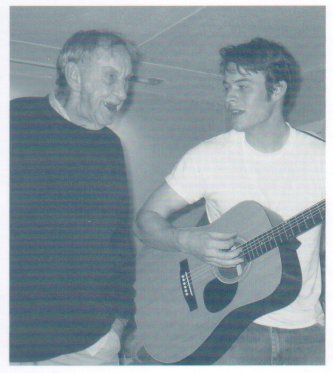 Fast-forward three years. Jonathan and I have met and married, and we are about to say goodbye to Gene.

As I wrote at The Bold Life: “On the night before Gene died, I was eating dinner alone in my apartment. Suddenly, I was struck by a visceral knowing: This is Gene’s last night. This will be the last time I can see my friend. Trusting that intuition, I moved quickly.

On that final night, my husband played a song on the guitar; other L’Arche members rubbed Gene’s skin with lotions and wiped his brow with cloths.

Gene was never alone in his last days; the entire community rallied around him. I held his hands in mine and told him all the best stories I could think of, the good times we’d shared together.

The song was one I’d never heard before: I Saw the Light by Hank Williams.

It’s a ‘conversion’ song, yet it’s also a song you’d sing if you’d experienced healing from cancer, or found out your friend was going to live. It’s a song about the beautiful moments of clarity in this life, the ones that illumine our way forward. It’s a song about having a reason to sing. 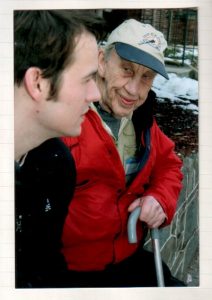 As I was reminiscing with Jonathan this New Year’s Eve, I said, “I remember being amazed at that picture of you and Gene from 2005. And I was even more amazed when you played for him the night before he died. It was the most beautiful gift you could have given.

You could see it in Gene’s face; even though he couldn’t move, he was transformed. He was full of joy.”

Jonathan’s reply? “It was the same song … in the brochure picture, we’re singing, ‘I Saw the Light’.” His tone implied: But however could you have known that?

We sat in silence, humbled by mystery. And in the deep stillness, I could almost hear their song. For a moment, that shared music was bigger than the days in between then and now. It was timeless.

And that’s my wish for you this year: that you might hear a song that speaks to you of timelessness, a song that reminds you of the love that has surrounded you your whole life long.

Because when you are aware of that love, you relate to others differently. You pay attention to your intuition, because it knows more than your conscious mind. And most of all, you look around at the beloved people in your life and arrive at the conclusion that you are blessed beyond measure.

And if you’re like me, you’ll want to tell these people that, in the words of poet Conrad Aiken,

“Music I heard with you was more than music,

And bread I broke with you was more than bread.”

Do you have a theme for the new year? Share your thoughts in the comments below!

*L’Arche is a faith-based non-profit organization that creates homes where people with and without intellectual disabilities share life together. I spent 5 years serving the DC community in various caregiving roles.