About a year ago, I encountered a few words that changed my life. 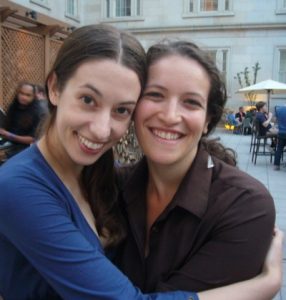 When we first met as roommates, we weren’t sure we had a thing in common. Nearly 10 years later, her friendship is a treasure.

You know what I mean — it’s the moment when a lyric from a song or a verse from a poem suddenly shoots right through you. It’s that AHA of recognition that comes when you read something and say, “That’s it exactly.”

This happened to me last year when, after leaving a stunning photography exhibition featuring actors and actresses with developmental disabilities in the Duvteatern troupe, I rode past a building with these words on it:

That day, I glimpsed a new truth within those old, familiar words. Before, I’d understood them like this: Do good to others, and in doing so, you’ll serve God, too. While that interpretation is valid, another meaning surfaced.

The words opened themselves differently, saying, “I am the least of these. You’ll find me — the love that sustains the universe — in your brothers and sisters with special needs, the ones the world considers strange, broken, or disabled. And I am within you when you are the one considered strange, outside, alien.”

To know me, you must meet the stranger with open arms.

Having said all this, you’d probably guess that the focus of my forthcoming Kindle Single, I Was a Stranger to Beauty, will be on my time at L’Arche DC, and the people I was privileged to know there.

But in fact, the new book, which launches on Monday, January 14th, is largely about my relationship with my brother, Willie. L’Arche DC plays a significant role (and will receive 5% of the proceeds from the first month’s sales), but the story starts and ends with Willie.

Why? Because Willie — the person I grew up with, my younger brother, my only sibling — was once a stranger to me. About ten years ago, Willie started struggling with aggressive and self-injurious behavior. I’ve written extensively about these difficulties, but I’ve never fully shared the loneliness that that time brought with it.

For years, I thought I had lost my brother. Even though he was alive, I thought that maybe his spirit, his humor, and his kindness were gone forever. (And I am so happy to have been wrong.)

But it wasn’t until I could welcome ‘Willie the stranger’ … that is, Willie of the rages, Willie of the black eyes and screams — that I could begin to rebuild our relationship.

That kind of acceptance is what welcoming the stranger is all about. It’s not about trying to change people (though change may come). It’s not about condoning harmful actions or denying what’s real. Instead, it’s about embracing what is, not needing anyone to be anything other than themselves, and moving forward from there.

Sometimes, welcoming the stranger may mean inviting them into your home. At other times, it may mean keeping a safe distance while acknowledging another person’s humanity, and dropping your previous judgment. 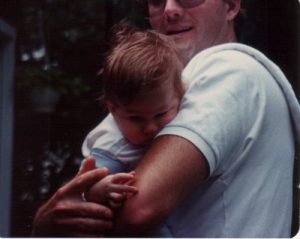 And sometimes welcoming the stranger means staying present to a person you don’t relate to or even recognize. It means being uncomfortable and unprepared, and, in doing so, giving a stranger a chance to become a friend.

To be fair, this is scary. That’s why we avoid it. We don’t know what to expect when we ‘welcome the stranger’ … and that’s the point. Crazy things can happen. Maybe we sense this, deep down; maybe that’s why we shy away.

But in this time of tragedy, in the face of death and destruction, we cannot afford to turn away from the darkness in others, in ourselves. We must not flee, but instead, bring light.

As Anne Lamott wrote last week: “I called [my friend] yesterday as soon as I heard about the shootings. Neither of us said anything interesting, but we hung out together on the phone and listened to each other’s voices, and grieved for the families of Newtown, and that helped.

These tiny bits of connection to the broken are very real, and the kindness and attention people show to one another create a tiny bit of light. That is my plan for today, to love as if my life depended on it; to breathe, and keep it simple, go easy on myself.”

I couldn’t agree more. We cannot afford any choice but compassion, for others and ourselves.

We cannot afford to be anything other than love. 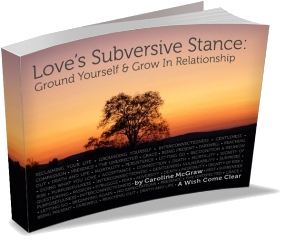 How have you welcomed a stranger?

Tell your story in the comments below for a chance to win a free, full-color, print copy of Love’s Subversive Stance: Ground Yourself and Grow in Relationship! (Winner will be chosen & notified as of noon CST on Thursday, Dec. 20th.)

Update: This week’s giveaway is now over – thank you to everyone who submitted a comment! Your words were so beautiful and heartfelt, it was so hard to select just one to receive a book!

Yet we’ll have more giveaways in the future, so for now, I’m happy to announce that Harry Brash will receive a complimentary copy of Love’s Subversive Stance.