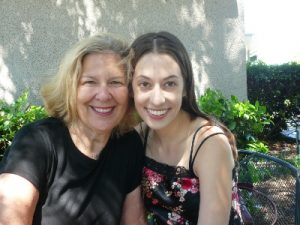 Once upon a time, I ran away from home. I ran in a very structured, organized, responsible sort of way, which is to say, I disguised the escape.

When my husband and I visited family last month, we spent time with my parents, brother, grandparents, and an aunt and uncle too. I’m blessed with a wonderful extended family, and I feel particularly close to this aunt and uncle. Why? Because I lived with them for a summer seven years ago.

When people asked me why I was staying with my extended family that summer, I had a list of answers ready. I wanted an adventure, a change of pace. I wanted to spend time with my aunt, uncle, and cousins. I was working to save money, and I’d found a job nearby.

Rarely did I mention the fact that, at the time, living with Willie had become nearly impossible. I don’t recall if I spent that summer away before or after he hurt me during an outburst, but I know that I didn’t feel safe with him at the time. Try as I might, I didn’t feel love for my brother. Fear consumed my heart.

Part of me felt intensely guilty about the choice. I felt like a bad daughter and a bad sister, for not coming home after my sophomore year at Vassar ended. But another part of me was so relieved to be someplace else, which made sense; I’d been physically and emotionally hurt by Willie’s behavior.

It was a good summer. I struggled with the guilt, and it was lonely sometimes, but it was also a restorative season. I wrote and went for runs everyday. I discovered that I enjoyed living simply, as I’d brought only a small number of personal belongings with me. And I felt connected to my aunt, uncle, and cousins in a way I never had before. We’d laugh and talk and take pictures and savor Wegmans pastries.

But in hindsight, the best thing about that summer was that living with my extended family actually helped me to accept and embrace my immediate family. Somewhere down the line, living with my aunt, uncle, and cousins calmed my frightened heart.

My family members taught me what I needed to know, just by being themselves. At the time, I hadn’t heard of L’Arche*, and I found it difficult not to judge Willie for his struggles. At the time, I tended to take his difficult behavior personally. I was angry with him when he acted out.

But that summer, I learned that every family struggles. My cousins and their parents weren’t dealing with autism, aggression, or self-injurious behavior, but they had challenges of their own. (And joys. And then more challenges.) They, too, were living this crazy thing called life.

When I ‘ran away’ in 2005, I also discovered that my parents’ home (tumultuous as it was) and my aunt and uncle’s home (which felt calm by comparison) had a key element in common. Quite simply, both homes were full of love. Real love.

My parents were doing their best to love both Willie and me. And in that season, loving their son meant keeping the faith. It meant letting him stay in their home even when it wasn’t easy to do so.

And in that season, loving me meant letting me go. With tears in their eyes, my parents let me make the choice I needed to make. They gave me no guilt trips; they didn’t imply that I was letting them down. Instead, they loved me enough to open their hands.

In turn, my extended family showed me mercy by offering a safe haven. They told me that I could live with them for as long as I needed to stay. And even as I judged myself for not being ‘strong enough’ to stay with my brother, they welcomed me and affirmed my gifts. (In fact, they still speak with awe about how I used to organize drawers and tidy rooms for fun.)

In all seriousness:  they were the hands that framed the risk of returning to my immediate family, and I can never thank them enough for that. That summer helped me gain perspective and begin to let go of being so afraid.

And against all odds, I returned home with love in my heart.

Who has offered you a safe haven? Join the conversation in the comments section!