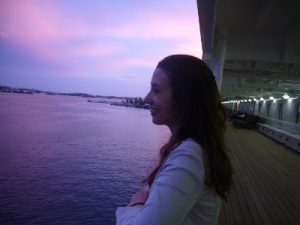 Yes, it’s really happening: my husband Jonathan and I are relocating from Washington DC to a small town in Alabama this week. Soon, we’ll be on the road, with everything in transit, everything in flux. For a couple who likes their daily routines, this is a destabilizing prospect.

It’s a bittersweet ending, but it’s also a beginning. A new adventure is held out to us, and we’re reaching to grasp it. Even as one life seems to slip away, another is on the horizon, fast drawing near. Even as I’m hugging old friends goodbye, an invisible hand seems to be pulling me forward.

And that image reminds me of what I witnessed at my last L’Arche DC celebration this past Tuesday. (L’Arche is a faith-based non-profit where people with and without intellectual disabilities share life together in community.) Every Tuesday, L’Arche DC has a community night, where everyone gathers together to pray and celebrate people’s birthdays, anniversaries, and farewells.

On this night, Rob* was doing his usual routine of hopping from one seat to the next. Rob is a gregarious guy who uses sign language and vivid facial expressions to communicate. He often chair-hops during celebrations, availing himself of the opportunity to sit next to different people. When Rob had moved twice last Tuesday, he was seated next to Leo*.

At that point, I turned my attention away, so Jonathan had to nudge me to alert me to what happened next. Leo reached out his hand to Rob, in a protective sort of way, and held Rob’s hand in his own. For at least ten minutes, the pair sat peacefully together. As I watched them, Leo met my gaze; his smile had a proud lift to it, as if to say, ‘Look, I’ve got this situation under control. The chair-hopper has been stabilized.’ And I smiled back, treasuring the gentle way in which Leo was leading Rob to be still. 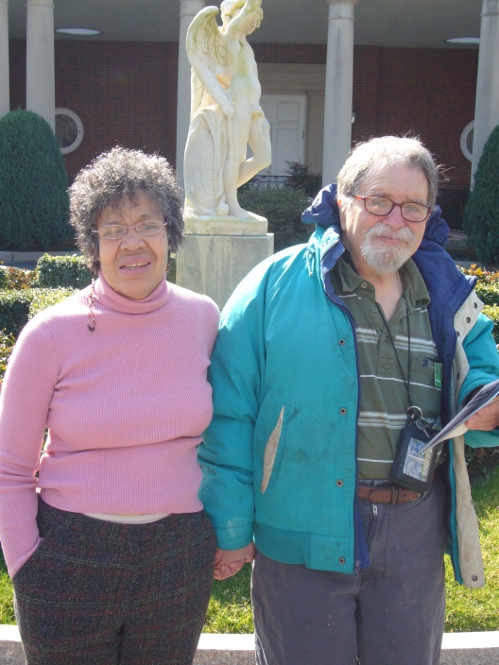 This hand-hold opened the gates of memory; five years of watching Leo reach out flashed before my eyes. I recalled how Leo had held Cassandra’s* hand on our trip to Hillwood, helping her keep her balance. I saw how tenderly he had patted Miguel’s* shoulder when he sat beside him at supper. (It’s rare for Leo to initiate or prolong a touch; when he does, it stands out to me.)

And I remembered how, weeks earlier, at Jonathan’s farewell celebration, Leo held my hand during a prayer, and continued holding it after the rest of the room had dropped hands. I was simultaneously shocked and honored by his gesture.

Not many would consider Leo an intuitive sort of person; he loves facts and history and sticking to his guns. And yet he has an uncanny way of knowing when to reach out, when it matters most.

For you to feel the sweet significance of those memories, though, I have to tell you the truth about how we began. And that brings me to a confession: when I first met Leo, I didn’t see past the surface.

I used to be a bit grossed out by the grime that could collect under his fingernails … until I started cleaning and clipping them myself.

I used to be (secretly) critical of how he’d miss a button on his shirt or forget to buckle his belt … until I started helping him get dressed in the morning.

I used to be put off by his (at-times-intense) need for attention … until I started learning about his life story, and all the times he’d had to fend for himself.

When Leo let me care for him, he changed my heart.

Never again would I look at him — and others like him — in the same way.

Where I’d once seen dirt, I now saw someone who engaged with the world around him.

Where I’d once seen disorder, I now saw someone who was humble enough to accept help.

Where I’d once seen frailty, I now saw someone who possessed great strength.

Leo would be the first to say he’s not perfect; like the rest of us, he has challenges and weaknesses. Yet he once said that to be human is to be humble … and that, in order to be humble, it helps not to be afraid of your faults. I believe that this is what keeps him reaching out.

And as we prepare for this new stage of life, I’m trusting that Leo’s gift will keep on giving. He has taught me that, imperfect as we are, there is power in our touch, power in our desire to give and receive comfort … power enough to effect lasting change.

There’s great sadness in leaving L’Arche DC, yet in another way, there’s great joy. In leaving, I realize the deeper truth that I will never leave.

After all, how can you leave that which is always in your heart?

When has caring for another person changed your perspective? Tell me in the comments!

Also, due to the aforementioned move, new posts are expected to resume in two weeks.