Of all the surprises that my birthday held, the one I least expected was a stranger’s serenade.

Naturally, this requires an explanation.

The week before my birthday, I’d dropped off my well-loved boots at a local shoe-repair shop to be re-soled. These boots have been my go-to footwear for two and a half years, ever since I acquired them during a freezing-cold vacation for which I was ill-prepared. (19 degrees in Alabama? When does that happen?) So, when the soles of the boots opened into holes, I determined that my friend Roberto would be the one to rescue them.

Roberto had repaired my husband’s work boots previously, so I knew he would do a good job. I dropped my boots off on a Thursday, and he told me to come back Saturday. We haggled on the price, exchanged names and pleasantries, and I felt great — soon, I’d have boots that wouldn’t leak water onto my feet when it rained!

Saturday arrived, and I went to the shoe-repair shop. Roberto apologized, saying that the new soles had come in late, and I’d need to come back on Monday. Since Monday was my birthday, I felt a flare of annoyance. The boots were supposed to be ready, so that I could wear them this weekend! He’d said. And this wasn’t a cheap repair … the good feelings I’d had about the errand evaporated. I was tempted to glower.

And then I remembered — not so much with my mind as with my heart — my friend Cassandra*, who lives at L’Arche in DC. (L’Arche is a faith-based non-profit that creates homes where people with and without intellectual disabilities share life together in community.)

Cassandra is a lady in the truest sense of the word; she is full of grace, one of the most forgiving people I know. She prays for those she loves, despite the fact that some, in infirmity or indifference, have not always loved her well. And to hear her sing … 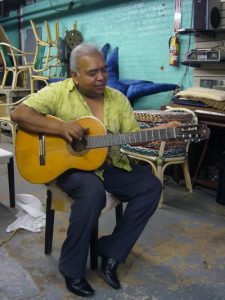 Thinking of Cassandra, I realized that Roberto was doing the best he could. I didn’t need my boots right away. I could wait until Monday. I could forgive, and let this one go. So I smiled and told Roberto that I’d be back Monday, which — I couldn’t resist mentioning — would be my birthday.

On Monday, I stopped at the shoe-repair shop. It was a beautiful day, and I was feeling buoyed by the love of the good people that I am blessed to know. Roberto greeted me enthusiastically, pulling my boots out from among dozens. The shoes were polished and outfitted with new soles, and as he handed them to me, he said, “Happy Birthday!”

“Thank you!” I exclaimed. I was happy to see my boots, glad that I’d given Roberto the benefit of the doubt. Then, apropos of nothing, he stepped across the counter, turned off the in-house music, and, in the sudden silence, said cheerfully, “OK, now you sit down!”

I glanced at the door, debating whether or not to bolt. Nice as he was, this guy was still a stranger … but I had nothing to fear. Roberto turned around and pulled a guitar from the wall. “I play a song for you,” he said.

I started laughing; he was going to play the guitar?! So much for being scared. “Um … OK!” I said.

The last traces of worry dissipated as he began to play. It was amazing: here was this man, stepping out from behind the counter and playing his instrument as though it was an extension of himself, with utter command and love. His polish-blackened hands danced as he sang, in Spanish, about a woman with beautiful eyes.

As the song ended, I clapped and said, “Bravo!” He segued into “Happy Birthday”, singing in English this time. However, he used the Spanish version of my name — Carolina — which is what my husband calls me. Mi Carolina, he said when he asked me to marry him, and Mi Carolina it has been ever since. I love it. 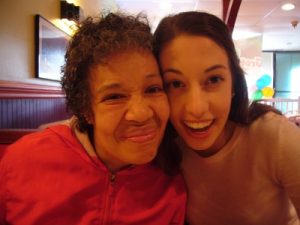 After the song ended, I thanked Roberto, and he spoke a blessing over my next year, saying that it would be “a year of Grace.” I was blown away. We hugged goodbye, and I knew that, once again, a stranger had brought God near for me. I could practically hear God laughing at my astonishment, saying, Glad you didn’t let yourself get too ticked off about coming back to the store today! If you had, I wouldn’t have been able to give you Roberto’s gift.

As I walked home with my boots, I could hear Cassandra’s voice in my mind as well, the way it sounded one night when we sang together in the L’Arche kitchen. I was on routine, and everyone else was upstairs getting ready for bed. I’d come down to help Cassandra with her routine, but instead, we swayed to the music that was playing. The song was, “Oh My Sweet Carolina”, performed by Ryan Adams and Emmylu Harris.

Ordinarily, I’d feel self-conscious about singing with just one other person, but with Cassandra, self-consciousness bowed out, in the face of something bigger. And as we sang together, I thought, This is what heaven must be like: a place where we offer our songs to one another without fear …

A place where Love calls you out by name.

Oh my sweet Carolina
What compels me to go?
Oh my sweet disposition
May you one day carry me home.

Have you ever been surprised by a stranger’s kindness?

If so, tell me about it in the Comments section below!

Liked this post? Click here to receive new posts via email, along with your complimentary copy of Your Creed of Care: How To Dig For Treasure In People (Without Getting Buried Alive).