On a chilly Sunday afternoon, I pedaled downtown to see a photography exhibit. As I parked my bike and dialed the apartment number, I wondered what I was walking into. I didn’t know the gallery or its owner, but a dear friend had told me I simply had to see these photographs. On the strength of her word I stood, and a voice welcomed me and buzzed me in.

Charles Krause opened the door for my wind-swept self and took my cold hand into a warm handshake, and bid me to enter the gallery. There were 2 other guests there, and all 3 gave me the freedom to move through the exhibit on my own. The first few photographs struck me as lovely, but it wasn’t until I got my breath back and really started looking that I began to see.

The photographs were all of Finland’s DuvTeatern Theater Company, and all featured the actors in costume for a performance of “Carmen”. As the exhibit papers told me, “This unusual production included 12 actors and dancers with Down Syndrome or other intellectual disabilities …. DuvTeatern’s “Carmen” became, overnight, a glorious critical and artistic success…” 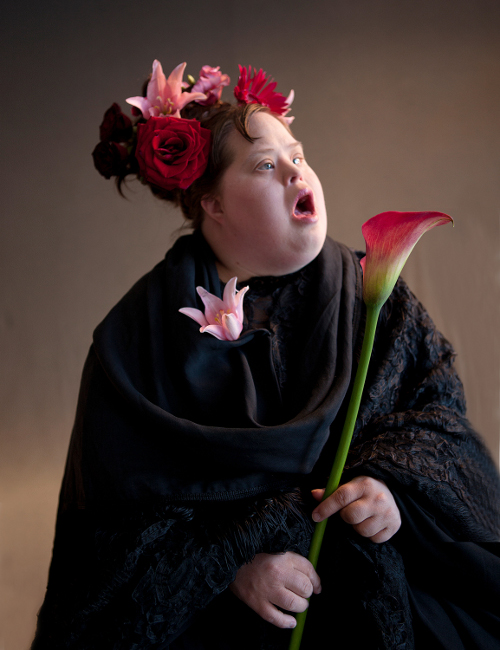 The actors and dancers were stunning — bedecked in bright costumes, ornamented with flowers. Yet I couldn’t stop looking at their hands; specifically, the hands of the woman pictured below. For reasons inexplicable, those hands just moved me.

Those hands, wrapped around the stem of a lily. As I looked at them I started to feel a tremendous courage in the room with me, a courage that was like a presence, alive.

I knew without a doubt that it was their courage, their strength — these people who dared to be beautiful in a world that often fails to recognize true beauty. These people challenged my fears and filled up my eyes. They made me want to live bigger. They made me feel like I could dance.

As I entered the second room of the exhibit, I was relieved to be alone; I could feel my composure starting to go. And then I came upon a small portrait that undid me completely. 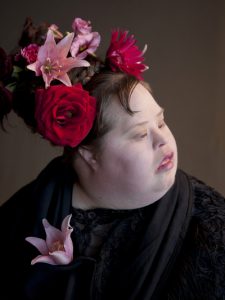 It was the same diva whose hands had entranced me in the other room. Now, however, instead of a giant portrait, I found an illuminated image of her fitted into a small alcove. It was the kind of thing one doesn’t expect to encounter amidst a series of majestic canvases — an amazing picture tucked to the side.

And in gazing at this work, I thought of how many times throughout history when we have hidden people with special needs away. We have segregated them from the rest of us, and pretended like it was ‘best’. My heart ached to think of how many were locked away, their beauty never to be shared.

And then, by contrast, I encountered this diva … this woman whose portrait was tucked away. But I could see that this placement was a celebration, not an isolating choice. This little alcove showcased her delicate loveliness. Her portrait was a treasure just waiting to be discovered.

If I’d been alone, I would have knelt down and wept for past cruelties, and for people (because there have always been some) who have had the strength to see past difference into a new world of grace.

As I pedaled away, my heart was full of everything I’d seen. But something made me stop my bike abruptly. I was passing a church, and the words on the gates outside called out to me.

And as I saw those words, something in me said, Yes. That’s what I feel.

Despite the life I’ve lived, despite the people I’ve loved, there are times when I lose my way and forget what is real, lasting loveliness. I start to think that my beauty and worth depends on how I measure up to models, how much I can achieve, or how hard I push myself to meet an impossible standard.

At times like these, I become a stranger to the world of true beauty, of what it means to really shine.

I was a stranger, and the DuvTeatern Theatre troupe invited me in to their world: a world where beauty is about having the strength to become who you already are.

Have you ever felt yourself invited into a new version of beauty?

Tell me in the comments! I love hearing your thoughts.