This is a story about a time when I fell flat on my face. Metaphorically, I mean. And I don’t know about you, but that’s a big fear of mine. Preparing and trying to do my best, and instead…completely blowing it.

When L’Arche DC celebrated its 25th anniversary birthday, I volunteered to give a speech with Leo at the Saturday evening banquet. I was his accompanier, and L’Arche DC’s 25th anniversary was more Leo’s celebration than anyone’s. As the community’s founding member, it was a milestone for him. 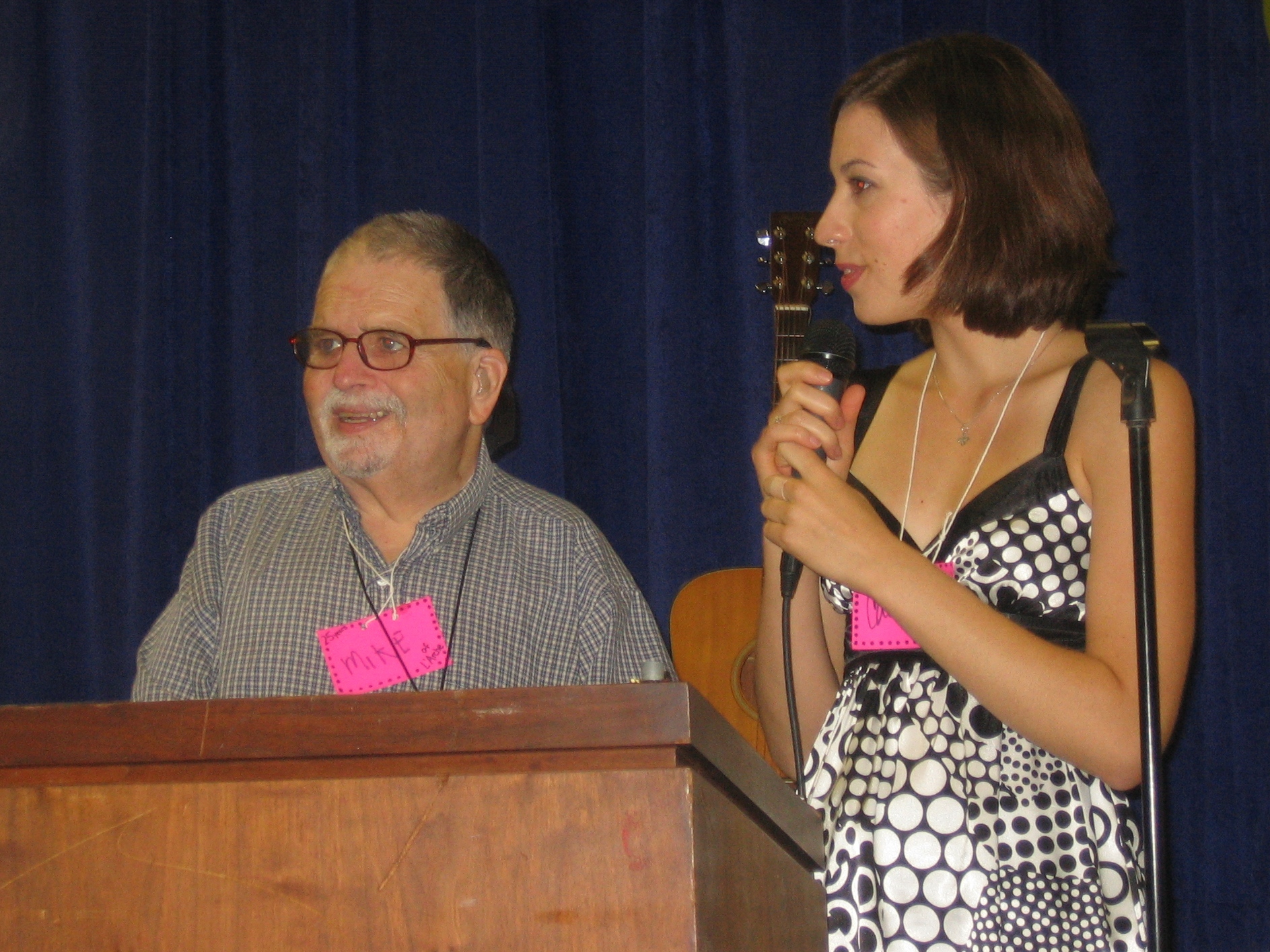 Me and Leo, giving the L'Arche DC 25th anniversary speech!

So Leo and I practiced in an interview format, as though I was Barbara Walters and he was a major political figurehead. We rehearsed a series of questions: “Leo, what do you like about L’Arche? What have you learned about yourself in L’Arche? What have you learned about God at L’Arche?” And Leo would respond at length. Yet as the appointed day drew near, someone mentioned Leo’s fear of public speaking, and I felt a quiver of apprehension. But I thought, “Sure, he’s scared to say what’s wrong with him when we go to the doctor, but since he agreed to this, he actually wants to do it.” Right?

Wrong. Very, very wrong. I’d forgotten that Leo’s a people-pleaser. (Perhaps I’d forgotten because I am similarly afflicted.) The person who asked him to do the speech was his first accompanier, and the 25th anniversary was her pet project. How could he say no to her? He couldn’t. That’s how Leo and I ended up on stage, with me introducing us, and him…not speaking. I held the microphone, repeating, “I’m Caroline, and this is…”

He was supposed to chime in with his name, like we’d practiced. But he just stood there shaking his head. A blush was rising on his cheeks. I looked at him pleadingly, my eyes begging, “Say your name, Leo!” and his eyes, when they met mine for an instant, begging right back, “Please don’t make me!” We were standing in front of about 200 people, and I had no Plan B. I looked out over the crowd of expectant faces. You have to do something, I told myself sternly.

Fortunately, a sense that I had to save the day wasn’t all that rushed over me at that moment. In the span of seconds, I saw Leo and I saw myself, both so scared, both trying so hard to get it right. And it was compassion for both of us that led me to say, “Well, this fine man next to me is Leo, the founding member of the L’Arche DC community, and it’s his anniversary too!”

I waited for the applause and laughter to die down, and then I said, “Leo, how about if I share what we’ve talked about together? Would that be all right with you?” He managed a nod. His face was looking better. He still wanted to bolt, I could tell, but it seemed like he might actually make it through the speech if I made it quick.

So I told the crowd about our conversations, and how Leo is the resident historian of our unique community. I shared how he’s learned to speak up for himself; how before he came to L’Arche he let people push him around; how he’s learned that you can be both assertive and kind. Leo started chiming in here and there, correcting a misremembered phrase with his exact words. I didn’t mind being corrected; I was so relieved that he was actually speaking. And when I came to the last point, there was a lump in my throat.

I said, “When I ask Leo about God, he looks at me like he’s a college professor and I’m a kindergartener asking silly questions. He says, ‘God? God is everywhere.’ And I love how Leo opens my eyes. I love being a part of the community he helped to found. I love how I’m starting to see because I’m starting to love.”

I swallowed and said, “Thank you.” Leo said, “Thank you.” I was so proud of him. We took our seats to loud applause. I wanted to reach over and hug Leo, but instead I put my hand on his shoulder. “We did it!” I said, “Well done.” And he nodded, just once, in acquiescence and affirmation.

At my farewell celebration last week, I felt like I felt years ago as I stepped away from that podium with Leo:  embarrassed, amazed, and awestruck by how woefully underqualified we all are for the important tasks life has for us. Being a program director, giving a speech, loving one another…who are we to do any of it?

But still, we have said yes. And that yes, that attempt– even if it precedes fumbling and failure– is a beautiful thing to witness.

That speech with Leo was an outtake of sorts, yet it’s a moment I cherish today. Because truly, life isn’t about being flawless. This is a tough realization for an overachiever, who has too often made the mistake of avoiding failure at all costs. From the perspective of years, though, it doesn’t matter whether or not Leo and I gave a polished speech that day. In the same way, it will not matter years from now whether or not I turned in ‘perfect’ quarterly reports as a program director (though I definitely tried to do so)!

It was never about any of that. Life — real life– is about whether or not we show up for one another. It’s about whether or not we try, in the midst of our own frailty, to offer the best of ourselves to one another. Real, lasting success isn’t about not making mistakes. True success is about love. It’s about touching the life of another human being.

It’s the same epiphany I had when I looked across that stage and thought, “You know what? I bet the only reason Leo hasn’t bolted– the only reason he’s still up here at all– is because we care about each other.” And once I had that thought in mind, I held my head up high.

In that spirit, I’d like to share with you this song, which was played during my farewell celebration. It’s called, “We Are Each Other’s Angels”, by Chuck Brodsky. (This would also be a good time to mention Brooke Adams Law, my best friend, who introduced me to this song; she has embodied the lyrics for me many times. If you’re looking for some good reads & gift ideas this holiday season, be sure to visit her at Books Distilled!)

“…we are each other’s angels / And we meet when it is time / We keep each other goin’ / And we show each other signs.”

Who (or what) has kept you going in this season?

If you enjoyed this post, consider receiving new posts via email; you’ll receive Your Creed of Care as well!