I don’t know about you, but I’m in shock that it’s September. Where did the summer go? The season is changing. School is starting, sweaters are on sale, and there are just a few months left of 2011.

It’s a time of transition, and it tends to make us question ourselves. Are we where we hoped we’d be? Are we doing enough for others, being enough?

In August, my husband and I faced multiple stressors:  overwork, fatigue, illness, death, mourning, (minor) injury and car breakdown among them. It was enough to leave me weary…and when I get tired, doubt and discouragement tend to come knocking.

But when they do, I think of something else I witnessed in August, something that trumps that list of stressors. A small breakthrough, something I never thought I’d see.

I’ve written before about my brother’s gift for music, how his piano lessons have inspired me in my own creative work. But last month he did something that inspired my courage, too. 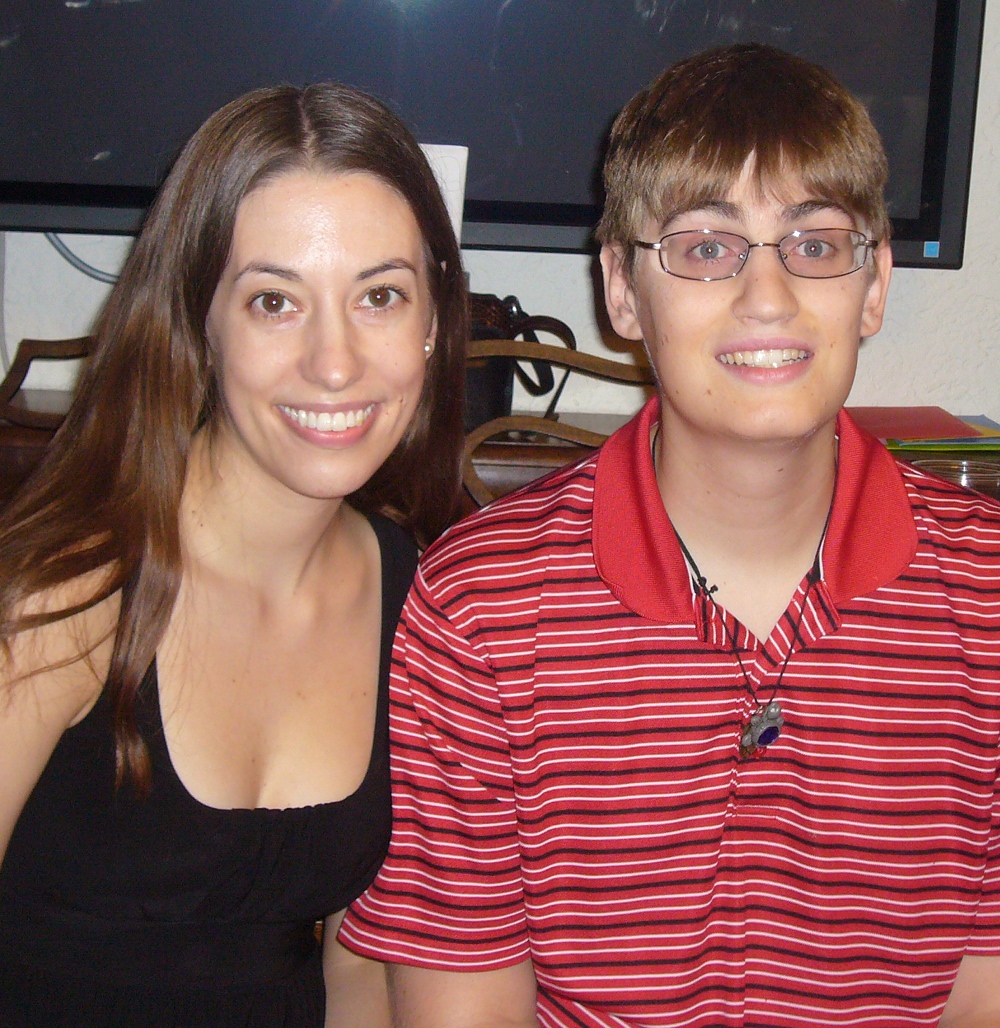 Me and my brother, just after his 'Happy Birthday' performance triumph.

My family and I were gathered at the home of some close friends, celebrating their son’s second birthday. Willie was with us at the party, but he kept to himself, watching his DVD player. He likes to see our friends, but he prefers quiet to socializing. I checked in with him a few times, to keep him company and to make sure that he wasn’t feeling agitated or overwhelmed. He was relaxed and calm, and I felt relieved.

Then, when it was time for dessert, he came in to the living room where we were gathered. My parents had called him in and asked if he’d like to play a song on our friends’ piano. But I felt myself tense up; would he feel thrown by the unexpected request? What if he made a mistake? He’s a perfectionist; one wrong note could be a disaster. What if he threw a tantrum and broke the piano? (There’s precedent.)

But he didn’t. He played well, and we all applauded. Yet still, I couldn’t relax. Would the loud noise of the applause irritate him? Would the attention bother him?

Then, as the birthday boy was about to make his entrance, my mom said, “Willie! How about if you play ‘Happy Birthday’ on the piano while we sing?”

As you can imagine, I was tense beyond all reason by this point. But Willie was not. He was in his element. He played ‘Happy Birthday’ with stateliness and pride, and, though he jumped off the piano bench as soon as he was done, I could tell that he was pleased.

I’d underestimated him. True, he’s struggled with noise and attention and perfectionism in the past. (Frankly, so have I.) But in that moment, he showed me:  he’d grown. He’d changed. My parents had allowed him the dignity of risk, and he’d been up to the challenge. And I had tears in my eyes.

Yes, he still struggles with (regular) outbursts. But he’s far from where he was a few years ago, when I was afraid to be in the same room with him. When he couldn’t stop himself from hurting us. When he was in so much pain that every day was a torment.

It also reminded me that our smallest actions, when done with love, have the power to liberate others. To literally set them free from their doubts and help them to believe.

But how to get there?

As Brene Brown writes in The Gifts of Imperfection, “Overcoming self-doubt is all about believing we’re enough and letting go of what the world says we’re supposed to be and supposed to call ourselves.”

Here’s the thing, though:  that can’t be done in a vacuum. We have to do it in the context of relationship. It’s too hard to let go of ‘not being enough’ if we don’t have someone, somewhere, who believes we are enough. Who has believed in us when we didn’t have the strength to believe in ourselves.

If you’re not at a place to offer encouragement right now, that’s okay. Resolve instead to ask a loved one for help. Offer compassion to yourself as you’re struggling. (As Liz Gilbert wisely wrote, “To thine own self be very, very kind.”)

Wherever you’re at, set an intention to set an example. Act with kindness when someone else is being rude. Share your strength with someone who is weak. Tell the truth when you’re tempted to hide. Just as Willie’s playing gives me courage, your act of bravery may make an essential difference to someone else.

Who knows? The life you change just might be your own.

Finally, I heard a beautiful song this weekend, “Crushed and Created” by Caitlyn Smith. (You can listen here.) I share the chorus with you in hopes that it will embolden and empower you as it has me.

If you desire to make a difference in the lives of others– to ground yourself and grow in relationship– you’ll want to get on the advanced notification list for the new book I’ll be publishing (which will be offered at a 50% discount ONLY for those on the pre-sale list).

If you want to be on the advance notification list…

Simply click here & pop your email in the box!

While we’re at it, spread the word! Thank you for sharing this post with family & friends.

And if you enjoyed what you read, consider receiving new posts via email!

You’ll also receive a free copy of “Your Creed of Care:  How To Dig For Treasure In People (Without Getting Buried Alive).”