I love a long, rambling post as much as anyone (all right, probably more), but this Monday, I’d like to share with you a solitary moment…one I witnessed at approximately 1:40am this Saturday morning. 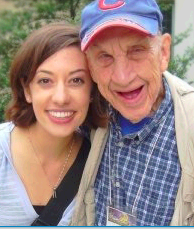 When I walked into the L’Arche Ontario house last Friday night, I had a plan. I’d finished an evening routine in Arlington, and I was all set to drop off the car keys, walk home and fall into bed.

Life, however, had other ideas.

I got as far as ‘drop off the car keys’ when one of the assistants called me over. “Caroline,” he said, “I think you’d better come see Vincent*.”

It was then that I realized just how many people were gathered in the kitchen. They’d been so quiet.

And as I walked through the door to Vincent’s room, the reason for that silence became clear.

Vincent was struggling for breath. He was paler than I’d ever seen him. Three assistants were gathered around him, holding a washcloth to his forehead, holding his hands.

I’ve mentioned before that Vincent has terminal cancer, and that he’s been like a surrogate grandfather to me. He’s given me permission to rest many times, and when I saw him last Friday, my first thought was:  I want to give him that same permission.

I stayed with the other assistants at Vincent’s bedside for 2 hours, until the hospice transport came. (No nurses were available to treat him at L’Arche.) We played his favorite Elvis records, showed him pictures of family and friends and even laughed a few times.

We never stopped holding him. One assistant would massage Vincent’s shoulders, while another would rub lotion into his hands. He was never for a moment without touch, without connection.

When hospice finally arrived, it was hard to let them take Vincent away. When we saw him in the stretcher, he looked too much like a body, and not enough like him.

I followed the stretcher out the door and stood on the porch. Jonathan came and stood beside me. Slowly, the other assistants came, too. We were all trying not to cry, and most of us were failing.

All around us, Adams Morgan was partying the night away. But we were standing together, watching strangers bear Vincent away. We didn’t know if he’d ever return. (We still don’t.)

Barbara (our DC Program Director) was walking with the emergency personnel. She’d been coordinating logistics since her arrival, and I hadn’t seen her show the emotion I knew she must have felt.

Barbara has cared for Vincent and the other core members for over a decade…and yet, when it comes to emergencies, she has to follow protocol. She has to hold it together, somehow.

The emergency care workers were getting ready to lift Vincent into the ambulance. Barbara stayed close by, offering Vincent a familiar face for as long as she could.

And that’s when time stood still.

Just before they lifted him up, Barbara reached out her right hand and touched the side of Vincent’s face. Such a simple, gentle touch, but there was so much love in it.

It was a stark, beautiful moment…one in which I realized just how much what we do matters.

At the end of the day (or at the beginning of the next), that’s what we’ll remember.

As of this writing, Vincent’s breathing still hasn’t stabilized. He’s still at the hospice center.

Nevertheless, there’s a kind of peace amidst the chaos. There’s something that I can hold on to whenever I feel grief and sadness getting too big.

A hand reaching up and touching a cheek. So little, and yet, it’s enough.

In the words of Frederick Buechner in Now and Then, “What’s lost is nothing to what’s found…and all the death that ever was, set next to life, would scarcely fill a cup.”

Thank you for the amazing + heartfelt comments you’ve posted here.

Your words mean a great deal to me, and I’m honored to write for you.

If you enjoyed what you read, consider receiving new posts via email! You’ll also receive a free copy of “Your Creed of Care:  How To Dig For Treasure In People (Without Getting Buried Alive).”