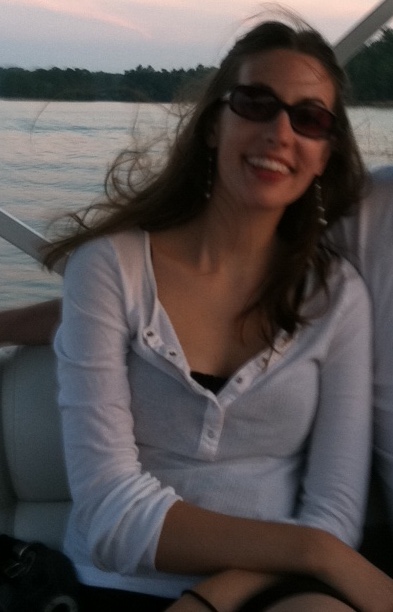 Sunset boat cruise, after initial attempts at water-skiing. (Smiling, but sore like you wouldn't believe.)

This past week, I vacationed with my husband’s family at Lake Martin, Alabama. I had brave, active days:  driving a WaveRunner, tubing and water-skiing. Yes, water-skiing.

For my first day out, however, it would be more accurate to say, “I went out into the water, wearing skis, with every intention of water-skiing.” I managed to get to a standing position maybe twice. Mostly, I fell down.

As my failed attempts continued, I felt a connection between my attempt to ski and every task or relationship that I’ve been tempted to give up on. I thought of my brother, my writing, my time as an assistant at L’Arche. I thought, “I can do this!”

Plus, I love being on the water. Sailing, swimming, canoeing…all give me a sense of strength. And, thanks to Danielle LaPorte’s work, I’m learning to define a ‘strength’ as something that makes me feel strong while I’m doing it (not necessarily something I’m superb at.)

As I kept falling, I felt my innate stubbornness rising. My father-in-law asked sympathetically, “Had enough?” But my husband said, “No. She’s in determined mode.”

Yet as we rode in for lunch, I felt the pain of defeat. Part of the pain was in my limbs, and part of it was in my ego. I’d expected that, since I can snow-ski and ice skate, I’d be able to water-ski. But despite my efforts, I made only slight progress. And I got a lot of water in my nose.

Herein lies step one of what to do when you feel like giving up on a task or a relationship:  realize that you had expectations, and that you’ve been let down. They may not have been high expectations, but if you’re human, you likely had some expectations. And you’re tempted to give up because those expectations were not met. Things are harder than you thought they’d be. You may feel like you’ve chosen the ‘wrong’ dream, or been assigned the ‘wrong’ person. This is not what you signed up for.

To move forward, you have to let those expectations go. What you need to focus on is the present moment. Focus on what’s happening now.

For me, that meant taking some deep breaths each time I fell, and realizing that I had a choice. I could quit, or I could take step two:  start over, without expectations, in beginner’s mind.

I chose the latter. And when I did, I started to make discoveries. For example, I saw that if I kept my arms on the outside of my legs, I had more success. I worked on my technique, and started standing up more often before I’d face-plant. It wasn’t much, but it was progress.

As I played down my ineptitude with witty one-liners and dogged persistence. I tried to take step three:  have fun amidst the (inevitable) failures. I tried to give myself permission to be a beginner, to make beginner’s mistakes. If you can’t have any fun working on whatever it is you’re working on, you may want to question why you’re working so hard on it in the first place.

Yet once I got home to change out of my wet things, I felt the toll that my persistence had taken. My legs and arms were shaking with fatigue. My feet were aching from being ripped out of the skis. I had nothing left; I felt I had failed. I broke down and cried.

Yes, I was weeping from fatigue and frustration, but I was also crying about all the times in my life when I’ve given my best and still been beaten. The semi-final volleyball match in my junior year of high school that we tried so hard to win. The people I tried to stay close to, only to see the friendships break apart.

Those tears offered me an important lesson:  step four is giving up.

There’s a beautiful paradox here. In order to move forward, sometimes we need to surrender. To admit how hurt we are. To say, “That’s it! I quit!” And then, once we’ve thrown in the towel…only then can we see if it’s something we truly want.

Want to know how it would feel to give up on your dream? Go ahead. Give it your all, and then quit when you’ve reached your breaking point. And then, if it’s something that you really want…be it a job, a relationship, or the ability to ski on water…

Get back up. That’s step five. Give up, take a break, but then do what it takes to stand on those damn skis. Keep learning, keep trying, keep asking for help. As a young Sam Lamott once said to his mother Anne when she fell down roller-skating, “‘You can’t give up, Mama. You just gotta get right back up on your hind legs and try again.'”

Step six, also counter-intuitive:  give yourself time before you try again. The body and brain work in mysterious ways; you can, in fact, make considerable progress on a goal simply by sleeping on it, and approaching it with different energy and insight in the morning.

This is how my water-skiing saga ended:  on our last full day at the lake, I agreed to give it another go. I fully expected to face-plant, but I wanted to give it one last try before calling it quits for good.

After pulling on the skis, I yelled, “Go!” I felt relaxed, ready for another round of falls. I coached myself on proper positioning. My muscles ached, but I wasn’t scared.

So it was a tremendous shock when, on my very first try, I found myself moving smoothly…up from the water…into a standing position…skiing a few feet forward…and then a few more…

Delightfully puzzled, I realized:  I was skiing! And it was easy. (Or would have been, had I not been so sore from my previous efforts.) Those years of snow-skiing with my family did pay off.

Before I knew it, we’d taken several turns around the lake, my husband and in-laws cheering me on. When I decided to let go, I felt my muscles trembling…but I also felt a huge grin on my face.

Which brings us to step seven:  Celebrate.

And that’s my wish for you:  a sweet moment of victory after your sweat and tears. A moment in which you know beyond a shadow of a doubt that it was right to hold out a little longer, endure a little more.

Whatever it is you truly, purely, inevitably want…don’t give up.

What do you refuse to give up on?

Tell me in the comments.